“The Hermit and the Smith” is the first of two new stories I’m writing for Tales of Old Giralliya.

I was inspired by a passage from the appendices of Hunting Wild.

The Holy Hermit Cathal was born into the social unrest and turbulence of this time. As a young man he pursued the course of an ascetic, withdrawing from human contact to pursue a life of simplicity and meditation. Later in life, one of the destined human sacrifices escaped to Cathal’s lonely hut in the hills and changed Cathal’s outlook.

Cathal realized that withdrawing from tumult was cowardly, and he emerged to challenge the disgusting practice of human sacrifice, speaking nearly every day to crowds in the realms of Istria, Eirdry, and Ennecy.

I wanted to write about Cathal. Not his full story, but that moment when he was confronted by the fugitive running for his life. 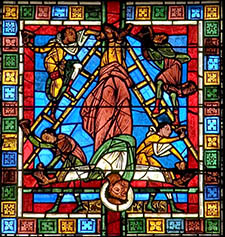 If I could just capture that scene, it would satisfy some longing in my writer’s heart.

But a story is more than just a vignette or cameo. The scene I was longing to paint with words needed more than one man fleeing and another offering him refuge.

So I put on my thinking cap.

Who was the fugitive? What was important to him? How did he come to be destined for blood sacrifice?

As I pondered these and other questions, I found myself wondering if I could connect my holy hermit with some of the events forming the backstory of The Tally Master.

That proved to be the concept that would ignite my creative fire.

I imagined the dry hills and the olive orchards around the city of Castarre. I discovered the name of the man—a metal smith—outracing the hounds. It all became very real in my mind’s eye.

And then I started writing!

For more about Tales of Old Giralliya, see:
Rebirth of Four Fairy Tales
Caught Between Two Armies
Tales in a New Bundle