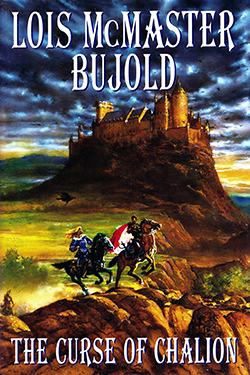 I dug in my heels, strongly resistant to Bujold’s switch from science fiction to fantasy, and resistant to her departure from the transformative exploits of Lord Vorkosigan. I wanted more of the Vorkosiverse, not something new.

By the time I reached the bottom of the first page of The Curse of Chalion, my resistance vanished utterly, converted into a torrent of enthusiasm. I was hooked! Now I clamor for more Chalion stories as loudly as I ever did for Vorkosigan books.

In Chalion, we meet Cazaril, a former courtier and soldier, making his slow way home from coastal Ibra to landlocked Chalion. He’s broken in body and spirit following his betrayal by the highest power in the realm and subsequent stint as a galley slave. Traveling alone and on foot, he downgrades his hopes and aspirations. How can he beg a place in a noble’s retinue when he wears beggar’s rags? A menial and anonymous spot in the kitchens will have to do.

But Cazaril turned his life and will over to one of the gods – the Lady of Spring – three years ago, desperate for the rescue of the soldiers under his command. And she has other plans for him.

Cazaril’s story explores the notion that opening oneself to divine inspiration carries the gravest of risks – death of the body, death of the soul, and forfeiture of self-will – but also leads to one’s deepest fulfillment and greatest achievement.

The Curse of Chalion at Amazon

The Curse of Chalion at B&N 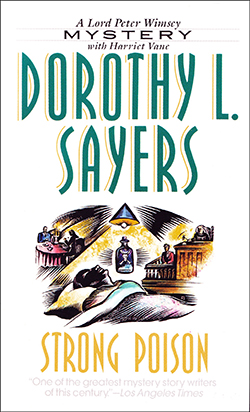 I enjoyed Dorothy Sayers’ Lord Peter Wimsey mysteries in a casual way. They are good, and I do like a good mystery, but I prefer a mystery more entwined with the inner growth of the characters involved. When Lord Peter finally meets Harriet Vane in Strong Poison, the arc of his personal development really begins. And that’s when I became a Sayers fan.

Like her author, Harriet Vane writes mystery novels. She knows all about poisons – a necessary part of her vocation – and she stands accused of her fiancé’s murder. He died in a manner identical to that portrayed in one of Harriet’s books.

Lord Peter sees Harriet by chance. He’s an amateur sleuth, often about and around the bastions of law. He catches the beginning of her trial, tumbles top over tail in love, and determines to prove her innocence.

The matter hangs in some doubt. Peter arrives rather late, after Harriet’s trial has begun. The evidence is damning, and Harriet escapes conviction only because one stalwart member of the jury doesn’t believe she’s guilty. Lord Peter has one month to dig up new evidence before the re-trial. 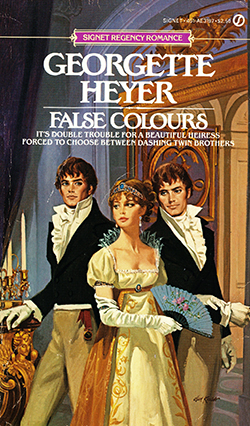 I’ve been a Heyer fan since my mid-teens and still enjoy her work. Her romances deploy a dry irony similar to Austen’s, but mix in effervescent fun for leavening. Her world building is as impeccable as the most dedicated fantasist. And her secondary characters are hilarious.

In False Colours, Kit Fancot comes abruptly home on the intuition that all is not well with his identical twin, the volatile Earl of Denville, Evelyn Fancot. And intuition proves correct.

Evelyn is not only missing, but in desperate need of serious cash – cash to the tune of 20,000 pounds, give or take a few thousand! In a scheme to get his hands on his own inheritance (held in trust for another five years), he’s offered a marriage of convenience to a sensible girl who won’t mind if he is less than devoted to her.

Kit jumps in to rescue his twin – who will surely turn up any day now – by impersonating him at his betrothal party. There, he discovers Cressida Stavely to possess quiet charm, a sense of humor, and intelligence. Surely she deserves a husband who actually loves her.

Heyer takes this romp of a tale through every kind of complication with wit and pizzazz, proving in the end that if you must be bold, it’s best to be very bold indeed. 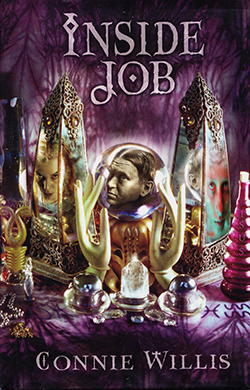 Inside Job is a novella, and I purchased the hardback by mail order ignorant of that fact. Out $30 when I discovered its slim 92-page length, I was appalled. The story couldn’t possibly be good enough to justify that kind of money!

I’m here to tell you: it was. And I’m glad to have the book on my shelves, because I re-read it every year. (The e-book edition, available these days, but not in those, is much more reasonably priced.)

Rob, professional skeptic and publisher of The Jaundiced Eye – a magazine dedicated to exposing fraudulent psychics, mediums, spiritualists, etc. – hired beautiful and intelligent Kildy Ross to be his assistant one year ago.

Now Kildy brings a new charlatan to his attention: Ariaura, previously a channeler of “Isus,” a spirit from the astral plane, appears to be channeling H.L. Mencken, the late reporter and bane of shysters and crooks in the 1920’s.

Rob and Kildy set out to expose Ariaura, but things get complicated. Is Ariaura really a fraud? Could she actually be channeling Mencken, beloved by all skeptics? And if she’s for real, what then happens to Rob’s life work?

With her characteristic wit and a lively sense of the ridiculous, Willis translates the conflict between good and evil into a delightful skirmish in the battle of science and reason and logic against quacks and con men.

Inside Job at Amazon

Inside Job at B&N

My next blog post would normally appear here next Friday on March 15. But my writing and publishing schedule is unusually heavy right now!

I’m writing a prequel to Rainbow’s Lodestone, I have two new short stories ready to publish, and I must finish the print editions of Sarvet’s Wanderyar and Livli’s Gift. So I’ll be taking a week off from my blog.

My next post will be in two weeks on March 22. See you then!