Draco is the personification of the dragon constellation in my story Devouring Light.

He’s old – ancient, really – jaded, and cynical. Inspired by a visit from Mercurio, the guardian of Sol’s first planet, Draco decides to make trouble merely to entertain himself.

In the course of his adventure, he leaves the solar system, flying through the Oort Cloud toward the closest star, Proxima Centauri.

As I wrote of his flight, I had some ballpark time intervals in mind, based on his speed.

Draco is a “celestial,” and I’d posited two modes of travel for my celestials in Devouring Light.

The planetaries (such as Mercurio) and other beings associated with celestial bodies “translate” from sphere to sphere, a slow sort of teleport in which they evaporate while departing one location and congeal as they arrive at their destination.

The constellations and more metaphysical beings must “fly,” physically traversing space rather than wormholing through it.

However, both travel at roughly the same speed: one astronomical unit per hour.

A quick refresher note for anyone who’s forgotten what an astronomical unit is. It’s the distance from the sun to our Earth – 1 AU for short.

Thus when Mercurio visits Haden on Pluto, it takes him about 48 hours to get home to Mercury. (And he’s tired!)

Now the solar system’s a big place, and the Oort Cloud beyond it, even bigger.

I figured that since my celestials took many hours in their travels between planets, traversing the Oort would surely take weeks.

Boy, was I wrong!

Luckily, I decided to do a little research before I continued writing my story. I discovered my mistake before I tangled up my plot line!

Naturally, I want to share some of what I discovered. 😀 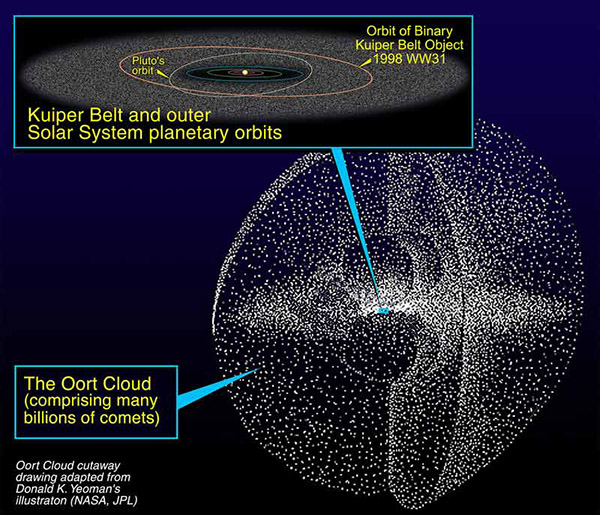 So, what is the Oort Cloud?

It’s a vast collection of ice chunks forming a sphere around our solar system.

I say chunks, but they’re big compared to an ice cube. And small compared to a planet. What size? Between 1 kilometer (.62 miles) and 20 kilometers (12 miles) in diameter.

And, I say ice, which does include water. But methane, ethane, carbon monoxide and other frozen substances also compose these icy clumps.

It is thought that the Oort Cloud was formed in the early days of our sun’s birth, when a bunch of young stars were popping into being in this neck of the galactic neighborhood. The tides between the stars played tug-of-war with the interstellar gases, creating ice balls, some of which stayed with our sun after things settled down. 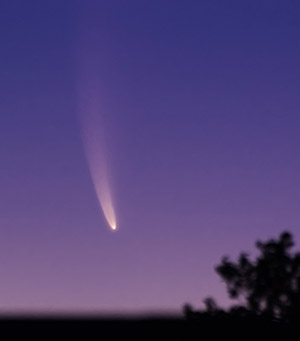 The stellar neighborhood is quieter now, but the outer Oort remains a fluid place. The sun’s gravity is weak that far away, and passing stars still nudge ice balls out of their orbits. Some get kicked away from the sun altogether. Others come streaming in as comets.

The inner Oort, named the Hill Cloud, is more dense than the outer and shaped like a massive donut. Most of our comets come from the Hill.

So what about Draco and his flight? If not weeks, how long did it take him?

Here are the numbers! And they amazed me. I knew the universe was big, but these boggled my mind.

The Hill Cloud’s inner edge is 2,000 AU from our sun. Which meant it took Draco 83 days to get there. Okay, 83 days equals roughly 12 weeks. So I guess you could say his flight was a matter of weeks.

But that’s just the beginning.

The outer edge of the Hill Cloud is 20,000 AU. By the time Draco exited the Hill, he’d been flying for two years and 3 months. Yikes!

And the outer edge of the outer Oort? At 50,000 AU, Draco passed through it after 5 years and 9 months. Quite a flight!

Good thing Draco is an immortal with vast reserves of strength. He needed it all!

But my story worked fine with these time frames, and I enjoyed exploring our solar neighborhood along with Draco. It’s a fascinating place!

For more of the science behind Devouring Light, see:
The Heliosphere
Mercury the Planet

For some of the mythology behind Devouring Light, see:
The Graces
Draco the Dragon
The Simiae

For more about the milieu of Devouring Light, see:
The Celestial Spheres of Sol
What Do Celestials Wear?
Roman Dining

And for the book itself, see:
Devouring Light