The first scenes of Fate’s Door take place in the cottage of the fates, in Scandia (Scandinavia). So I didn’t worry too much about the exact location of my sea nymph heroine’s home while I wrote those scenes.

Oh, I knew that she grew up in a reef palace offshore from a Mediterranean island. But precisely which island and where didn’t need to be determined. Not yet.

That changed the instant I finished Part 1 and wanted to begin Part 2.

“Where the heck is Nerine’s island?” I asked myself.

I knew it was not in the eastern reaches, the Levantine basin. Nor the western portion near the Pillars of Herakles (Strait of Gibraltar). Nor right off the coast of Greece itself.

No, it was centrally located and not too near the coast of either Europe or Africa.

I started searching maps and googling locations. And the island cluster I was looking for turned up pretty quickly.

The Isles of Pelagie are located in the broad Strait of Sicily that separates the western basin of the Mediterranean from the eastern. To the north is Sicily, to the south, Tunisia. The waters of the strait are shallower, with a deep current that moves from east to west, and a surface one that moves from west to east.

Honestly, the moment I spotted the Isles of Pelagie in one of the three atlases we have in the house, they felt right. I crossed my fingers that when I checked the details, one of them would be right.

The first thing that caught my attention was the name. It has a French sound to my ear, but it actually derives from the Greek word pélagos, meaning ‘open sea.’ That seemed a promising sign. A name deriving from Greek, rather than French or Italian, might mean the ancient peoples were aware of these islands.

My next step was to look specifically at each island. There were three, and I needed one that could support a sizable population, because Nerine’s friend Altairos is a land-dwelling island prince.

I envisioned his setting as a city-state grown wealthy from trade. The Isles of Pelagie certainly had a great location for trade. The ancient sailors always stuck close to shore. As a narrower section of the Mediterranean, the Strait of Sicily would be a natural place to cross the sea, and the Isles would serve as a natural stepping stone for that crossing.

The island of Lampione (Lamptír to the ancient Greeks) was clearly much too small. Altairos’ city-state might trade for a lot of its food, but some would need to be produced locally. Lampione is a rocky islet with tall bluffs and no good harbor, measuring a mere 656 feet by 591 feet (200 meters by 180 meters). The palace alone would sprawl over the entire ten acres, with no room for either a city or farmland or pasturage.

Linosa looked more promising. It’s considerably larger and, from the photo, looks to have a sheltering cove to serve as a harbor. Even better, Strabo (an ancient Greek philosopher and geographer) referred to it as Aethusa.

During the Punic Wars, the ancient Romans used it as a military base. The ruins from 150 water cisterns from this period still remain. 264 BC to 146 BC is somewhat later than my time period, 352 BC to 329 BC. But if the Romans could set up and run a permanent settlement, that would indicate that my fictional city-state might thrive there as well. 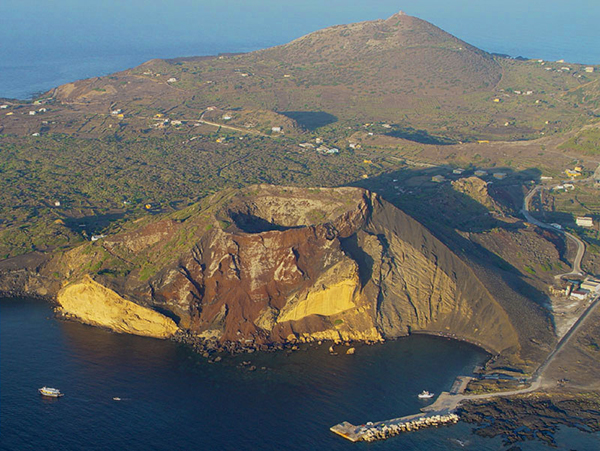 On the other hand, if the Romans took the island in 264 BC, it meant Altairos’ city-state fell to them in what might otherwise be Altairos’ happy old age. My book ends before such a gloomy happening, but why set my characters up for even unchronicled tragedy? I decided to pass on Linosa. 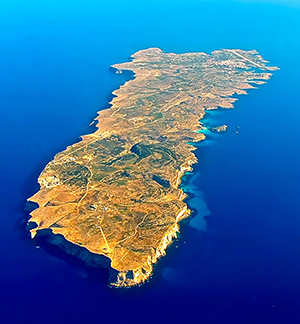 Lampedusa, the third island I considered (Lapadoússa to the ancients), turned out to be perfect. It is the largest of the three, with plenty of room for a modest city, a sprawling palace similar to that at Knossoss, and lots of land left over for orchards, vinyards, farming, and the grazing of livestock.

Apparently the ancient Greeks found it an excellent source for a particularly desired oyster. Historically, it hosted settlements of ancient Phoenicians, Greeks, and so on through the centuries.

My fictional city-state might not be so fictional after all. The Greeks started many colonies throughout the Mediterranean world, and there are many Greek ruins (along with ruins from other civilizations and times in history) on Lampedusa. Just because this particular settlement is not named in the surviving chronicles of the ancients does not mean it did not exist. Indeed, the ruins indicate otherwise.

The island has high cliffs on its western end, so I placed my city-state and its palace along the gentler southeastern shore, with Nerine’s reef palace in the sea farther west beside the southern coast.

This was an exciting moment. I had found the island where Altairos lived and the waters in which Nerine’s reef place was carved!

For more about the world of Fate’s Door, see:
Garb of the Sea People
Measurement in Ancient Greece
Horse Sandals and the 4th Century BC
Knossos, Model for Altairos’ Home