Devouring Light started from the idea of spectacle. Somebody – Mercurio – was creating a grand display involving the constellations. Draco, the dragon. Ursa Major, the great bear. And so on.

But what would this spectacle celebrate?

No mystery there. That was part of my initial inspiration as well: our sun’s birthday.

The next question was trickier. How would our sun – Sol – mark his birthday?

Possibly he did so in Earth years. Earth being the only planet in the solar system with humans on it lends these “Gaian” years a certain distinction.

But the universe of Devouring Light features many other beings: the spirits of stars, those of comets – all the celestial bodies of the cosmos, in fact.

And Sol is so very old when measured in Earth’s years. Using them as birth markers would be like humans using seconds.

My decision: Sol wouldn’t use the movements of anything within his own system to signify his anniversary. What about outside the solar system?

Posing that question yielded an immediate answer. Or, rather, another question which generates its own prompt answer.

What does the sun revolve around?

Our galaxy, of course.

There was Sol’s “year.” The time it takes for him to travel once around the Milky Way.

And how long is that? In Earth years? Being human myself, not celestial, I think in terms of Earth. And I had some research to do.

We know the age of our sun: 4.6 billion Earth years. An odd measure, when you consider that Earth herself was likely still a part of the dust cloud around Sol when he ignited. But that is how we measure long spans of time.

Our knowledge of the number of times that Sol has swung around the galaxy center is less precise. One circuit requires between 225 and 250 million Earth years. Sol has made the trip anywhere between 20 and 25 times.

Since I envisioned Sol as a fully grown “young man,” not a youth barely emerged from his teens, I chose the longer figure.

With this important question answered 😀 , I could call this blog post complete. But you know I’m not going to do that! In the course of my solar research, I learned a bunch of cool things about our sun. And, while I’m perfectly capable of sharing them all with you, I won’t do that either.

Instead I’ll tell you the one cool thing that was utterly new to me and that proved to be important to my story.

What, you may ask, is the heliopause.

I certainly didn’t know what it meant when I first encountered the term.

It has to do with the solar wind.

Now, I’d heard of the solar wind, and I thought I knew what it was. But I didn’t. Not really.

Because the solar wind is plasma.

What? Plasma? I thought plasma existed only in conditions of great heat and pressure. Like in the body of a star.

Well, that is a common place to find it. Although it also occurs in the instant of a lightning strike.

And the solar wind is this plasma hurled off the surface of the sun and out into space.

Obviously, the solar wind is very “thin,” with only a few particles within a lot of vacuum. Almost like a vapor or a gas. But it’s plasma, not a gas, because the particles have a charge. And it packs some punch. Think of the solar yachts posited in SF stories, with sails catching the solar wind.

Luckily, because the plasma particles have a charge, they get bounced by Earth’s magnetosphere. But that’s another topic! Maybe a future blog post? 😉 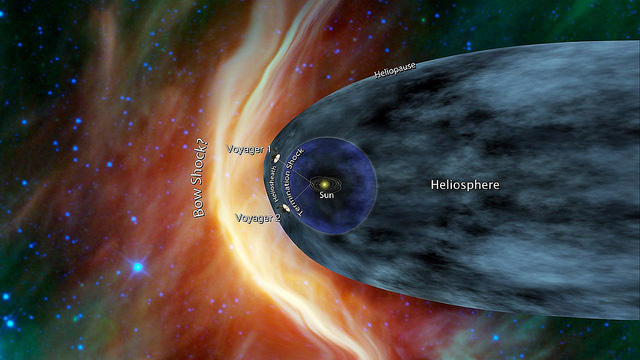 The solar wind blows a long, long way. All the way past Pluto to nearly 100 astronomical units (100 AU).

To refresh your memory, one AU is the distance from the sun to Earth.

At 100 AU from our sun, the solar wind runs out of steam and ends, contained by the pressure of the interstellar medium and the stellar winds that roam the galaxy.

The bubble created by the solar wind is known as the heliosphere. It has a ripple in it, shaped like a pinwheel or a ballerina’s swirling skirt. It’s caused by our sun’s spinning magnetic field. And the heliosphere has turbulence at its edge, where the stellar winds press inward, while the solar wind presses out. 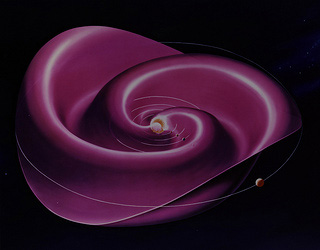 That area of turbulence is known as the heliosheath. And the great curve where the turbulence ends, the solar wind ceasing completely, is the heliopause.

Why did I care?

Because my dragon constellation, Draco, does some “flying” at the heliopause. I needed to know what he’d encounter there!

Not being a scholar, Draco calls the entire end zone the heliopause, rather than using the precise terms: termination shock, slow-down region, stagnation region, and depletion region. But his wings feel the strain of the turbulence regardless!

For more about the world of Devouring Light, see:
The Celestial Spheres of Sol
What Do Celestials Wear?
The Graces
Roman Dining
The Oort Cloud
Mercury the Planet
Draco the Dragon
The Simiae

For more about our sun, see:
Sol