It’s been a long time since I’ve done a book recommendation. Four years! (I just checked.)

My previous recs were all old favorites, books that I’ve read and re-read, books that I know I’ll re-read yet again in the future.

Today’s rec is a new favorite: The Goblin Emperor by Katherine Addison.

I read it first in December 2015, but I’ve already re-read it at least three times in the eighteen months that have passed since. It’s truly wonderful.

Here’s a little bit about it: 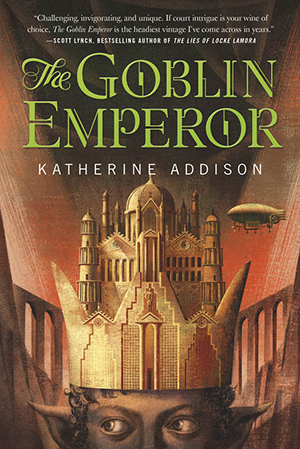 Maia awakens in the middle of the night to learn that his father, the emperor of the Elf-lands, is dead in an airship accident, along with all three of Maia’s half-brothers. Now Maia – a half-goblin who grew up in exile, poverty, and neglect – must grapple with governing the vastly complex elvish Ethuveraz.

His father’s chancellor hates him almost as much as his father did. His father’s dowager empress hates him more. And all too many of his father’s courtiers hate him, too. Maia toys with the idea of running away to obscurity, somewhere, somehow.

The Elf-lands have not been kind to the boy-emperors of the past, claiming their lives more often than not. Maia is not a child – he’s eighteen – but he’s nearly as inexperienced as those numerous dead boys whose tombs line the sacred hall in the imperial palace. Failure to grapple with the Ethuveraz – whether through ineptitude or through flight – leads only to another tomb like theirs.

The world building, characterization, and storytelling in The Goblin Emperor are all superb. And its protagonist, Maia Drazhar, beguiles me afresh each time I re-read the book with his unique blend of courage and kindness, and his struggles to overcome both youthful awkwardness and his (understandable) resentment toward his former guardian.

Here’s a brief excerpt – the very beginning of the story – to introduce you to Maia and The Goblin Emperor.

Maia woke with his cousin’s cold fingers digging into his shoulder.

“Cousin? What…” He sat up, rubbing his eyes with one hand. “What time is it?”

Obediently, Maia crawled out of bed, clumsy and sleep-sodden. “What’s toward? Is there a fire?”

“Get they clothes on.” Setheris shoved yesterday’s clothes at him. Maia dropped them, fumbling with the strings of his nightshirt, and Setheris hissed with exasperation as he bent to pick them up. “A messenger from the court. That’s what’s toward.”

“A message from my father?”

“Is’t not what I said? Merciful goddesses, boy, canst do nothing for thyself? Here!” He jerked the nightshirt off, caring neither for the knotted strings nor for Maia’s ears, and shoved his clothes at him again. Maia struggled into drawers, trousers, shirt, and jacket, aware that they were wrinkled and sweat-stained, but unwilling to try Setheris’s ill temper by saying so. Setheris watched grimly by the single candle’s light, his ears flat against his head. Maia could not find his stockings, nor would Setheris give him time to search. “Come along!” he said as soon as Maia had his jacket fastened, and Maia followed him barefoot out of the room, noticing in the stronger light that while Setheris was still properly and fully attired, his face was flushed. So he had not been wakened from sleep by the emperor’s messenger, but only because he had not yet been to bed. Maia hoped uneasily that Setheris had not drunk enough metheglin to mar the glossy perfection of his formal court manners.

Maia ran his hands through his hair, his fingers catching on knots in his heavy curls. It would not be the first time one of his father’s messengers had witnessed him as unkempt as a half-witted ragpickers child, but that did not help with the miserable midnight imaginings: So tell us, how looked our son? He reminded himself it was unlikely his father ever asked after him in the first place and tried to keep his chin and ears up as he followed Setheris into the lodge’s small and shabby receiving room.

The Goblin Emperor is available in many bookstores. A few links:
Amazon I Apple I B&N I Book Depository I Google Play I Kobo