Basic techniques taught to beginners include things such as the Zephyr’s Gavotte or the Breath of the Pegasus.

All of the techniques involve the manipulation of an inner energy referred to as energea.

Lealle is a visual practitioner, and her reach within for the energea shapes the both the result (such as healing a bruise) and the pattern of the flow of light.

If you were to cut across one of these currents of light and draw the cross-section, you would see a delicate snowflake of a pattern. 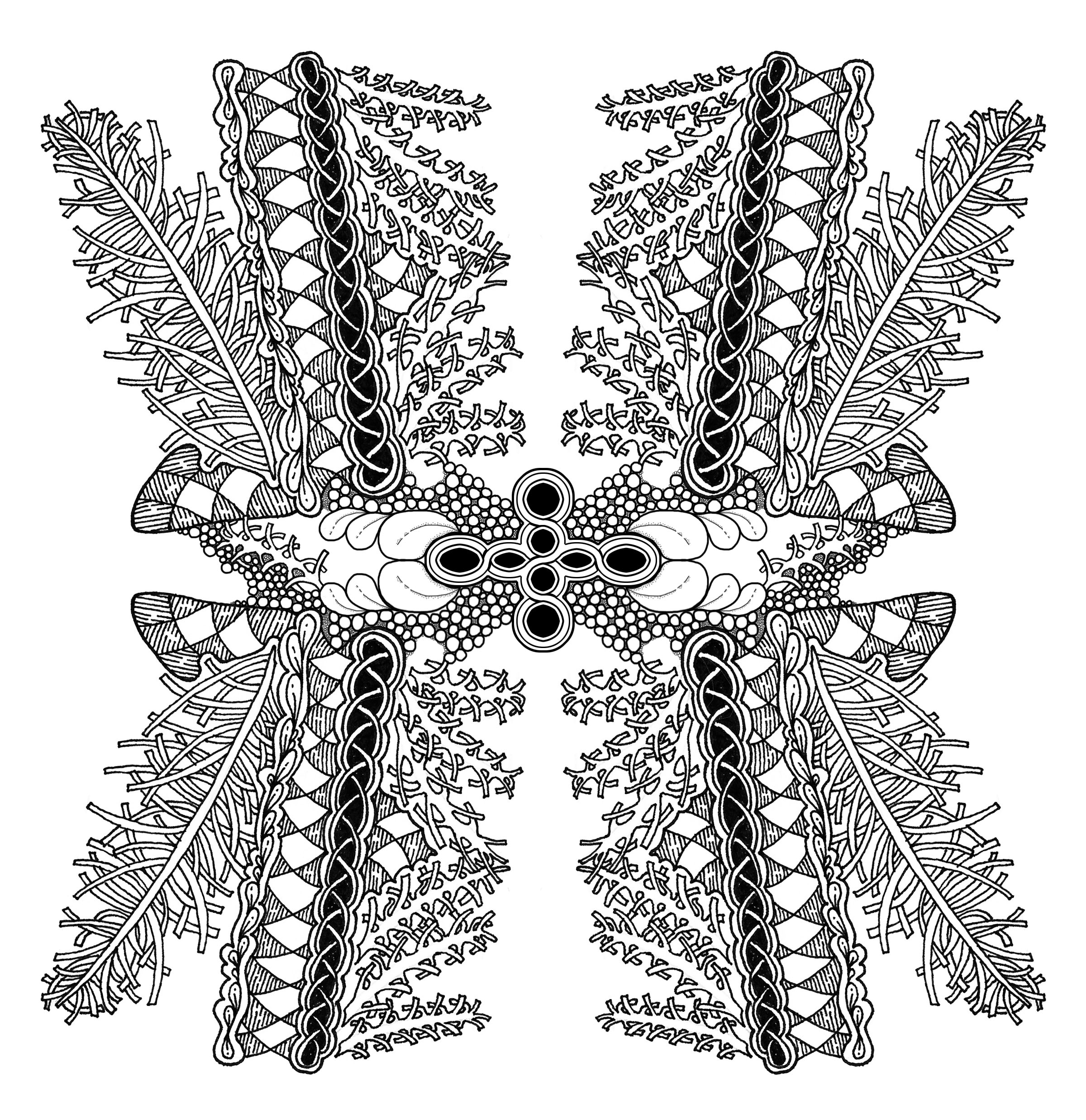 I imagined the magic of my North-lands long before I ever tried to tried to draw it.

And when I first put pen to paper, I didn’t realize what I was drawing. I thought I was creating images that had lain within my imagination unrealized until the tools from Zentangle unlocked them. This was true, but incomplete.

It was only when I explored the idea of publishing my drawings as a coloring book that I realized they were renditions of energea, and that there was a story about energea and a young mage I needed to tell!

Last Sunday’s post provided a perfect example of how I interact with my outline when I’m writing a story. I always have an outline, and I do follow it. Except when I don’t! That is, as my story unfolds, I usually discover that I need an extra scene or that I need to flip flop the order of two scenes, and so on. Plus my outline is merely a skeleton outline. Such as: Lorelin plays a trio with Kaye and Saune. (Not, emphatically not, Lorelin plays music with Kaye and Saune, then discusses right livelihood with them, and then learns that an imperial herald has arrived in Birkliden. Actually the news about the herald was planned for a later scene and got moved to this one.) I discover the details of a conversation as I write it.

In just this way, my outline for the blog post on Sunday was roughly: discuss magic of the North-lands. But when I found myself at my keyboard, I really wanted to explore the magic of Silmaren specifically and to tell you about it. Since I write from the heart rather than the head, that’s what happened. But I feel I still owe you the more comprehensive post, so I’m making another stab at it!

Civilized people in the North-lands use a gentle energy magic that is practical, but not flamboyant. It requires study and practice to achieve the upper levels of skill. Most are content to incline sick people toward health, to nudge crops into lush growth, and to adjust the worst storms into heavy downpours. It’s rare to heal someone near death, to grow fruit trees in non-arable land, or to disperse a hurricane. Even among the elite, such unusual feats are possible only if the underlying structures (the radices and the arcs) permit small repairs or adjustments to achieve spectacular results. Practitioners merely help the natural processes along in a favorable direction. They do not change the energy configuration significantly. That would be incantatio or troll-magic, which is both dangerous and illegal. Practitioners avoid large alterations to energy patterns. It’s perilously easy to drift across the line separating the safe from the forbidden when too much is attempted.

The varied peoples of the North-land realms speak of magic using different words. And understand it differently as well, through the lenses of their own cultures.

Silmarish keyholders are usually women, not men. The country phrase is that she holds the Keys of Sias, being specifically blessed by the Divine Mother. City folk say that she studies theurgia, and that she is a theurgist or a theomancer. Keyholders and theurgists alike use their powers largely for healing the sick and the injured, seeming unaware of theurgia’s greater potential.

The people of Erice worship the twin gods of Theon and Ionog (local variants – one male, one female – on Sias’ handmaidens Thiya and Iona) and believe that the divine twins bestow healing power on a few fortunate devouts. Country folk say that a healer has the Hands of the Twins, that he or she is a twinhand. More educated people merely say that such a practitioner is a healer or a physician. And that he or she practices healing or physic. Like the Silmarish, Ericeans emphasize the medical aspects of magic.

In Fiorish, Ionan (yet another variant on the handmaiden Iona) is worshipped and believed to be the source of magic. Rural people say a practitioner has the Sight of Ionan. She or he is sighted or a seer. Town folk call their magicians visionaries or visioners and hold that they have the Wisdom of Ionan. Miracles of healing occur with some frequency in the lady-chapels of the countryside, but ignorant and educated alike look for guidance in decision-making more than medicine from their seers and visionaries.

Rural folk and city dwellers alike speak of pattern-maitresses and pattern-masters, or patterners. Only the professors in the capital city of Caranda lecture on odylogists and the practice of odylogy. Auberoneans believe that patterning or odylogy is a natural ability of humans, not a gift granted from their god Teyo (yet another variant – male – on Thiya). Perhaps this is why their practitioners have broadened the use of patterning to create safe protocols in their mines and shipyards. They’ve begun exporting this expertise to Silmaren, which is why Reice ni Bayaude (in Troll-magic) spent many months out of the year in Andhamn, the mining city in Feldholm.

The laypeople of Pavelle speak of seekers or riddlemasters. The more religious talk of enigmatists who practice enigmology. Like their neighbors, the Giralliyanese, they understand that practitioners perceive the deep structures beneath surface appearances. Uniquely, they believe that the deep structures determine not only an entity’s nature, but the way it comes together with others to produce events, history, and reality itself. The focus of Pavanese enigmology is divided between a scholarly probing into the puzzle of the cosmos and enhancing the worship experience of cathedral congregations.

The people of the empire believe that all life is a vibration of energy, a tide of giving and receiving, a pulse of question and answer. Knowledgeable and ignorant alike call magic antiphony. A practitioner of antiphony is an antiphoner or an antiphonist. Giralliyans conflate spiritual health with physical health and view antiphony as the noble road to both. Nearly the entire population visits their local retreat for counsel from a personal antiphoner and for guidance in the posture sequences regarded as the foundation of happiness.

Despite this individualistic interpretation, or perhaps because of it, the imperial Ministry of Inventions is alone amongst the political powers in the North-lands in attempting to directly harness antiphony to technology. Success in the endeavor has not yet arrived, but when it does . . watch out!

Troll magic, or incantatio, is flamboyant, immediate, and acute in its effects. A troll-mage might pull a sick person back from the brink of death, grow watermelons in the desert, disperse a typhoon, and other such magnificent feats. Unfortunately, it is the practice of troll-magic that turns humans into trolls. It corrupts their bodies, starting with the ears and nose, which enlarge a little with each use of the power. It also unbalances their intellectual and emotional abilities. A troll-witch who has practiced troll-magic for years will have a nose elongated like a curled thumb, ears the size of normal hands, swollen hands and feet, a severely curved spine, coarse skin with a yellow tone, bloodshot eyes, and much ill health. In his or her mind, insanity reigns.

Troll-magic is forbidden in all civilized places, because its use essentially creates powerful villains. Even beneficiaries of a troll-spell cast by someone else (a troll-mage, of course) can suffer corrosive effects, so few seek it. The side effects are often so detrimental as to cancel out any benefit.

Most folk call this perilous practice troll-magic and its practitioners troll-mages or troll-witches. Only a few intellectual types use the terms incantatio and incantor or incantress or incantatrix. Nobody really wants to separate the idea of the magic from its effect: to make trolls.

Insane trolls do crazy and hurtful things with their power. Newer trolls usually flock to older and more powerful trolls in the wild lands. They have no place in the civilized world. The authorities arrest them, because they cannot be left at large, and sentence them to death. (Incarceration is impractical. How do you imprison someone who can break any cell?) Trolls don’t live long, because the troll-disease, once started, progresses. When it progresses too far, the troll dies. Even potent trolls who elude capture live short lives.

For more about magic, see:
Radices and Arcs
Silmarish Magic