In The Tally Master, the elite of the citadel possess quarters in the uppermost levels of the tower. Its warlord, Regenen Carbraes, inhabits chambers with an internal stair connecting several lower spaces with others on the upper floor.

Gael, the protagonist of the novel, chooses not to use the official apartments that go with his position of Secretarius, but he pays an unplanned and fateful visit to his empty rooms one evening. 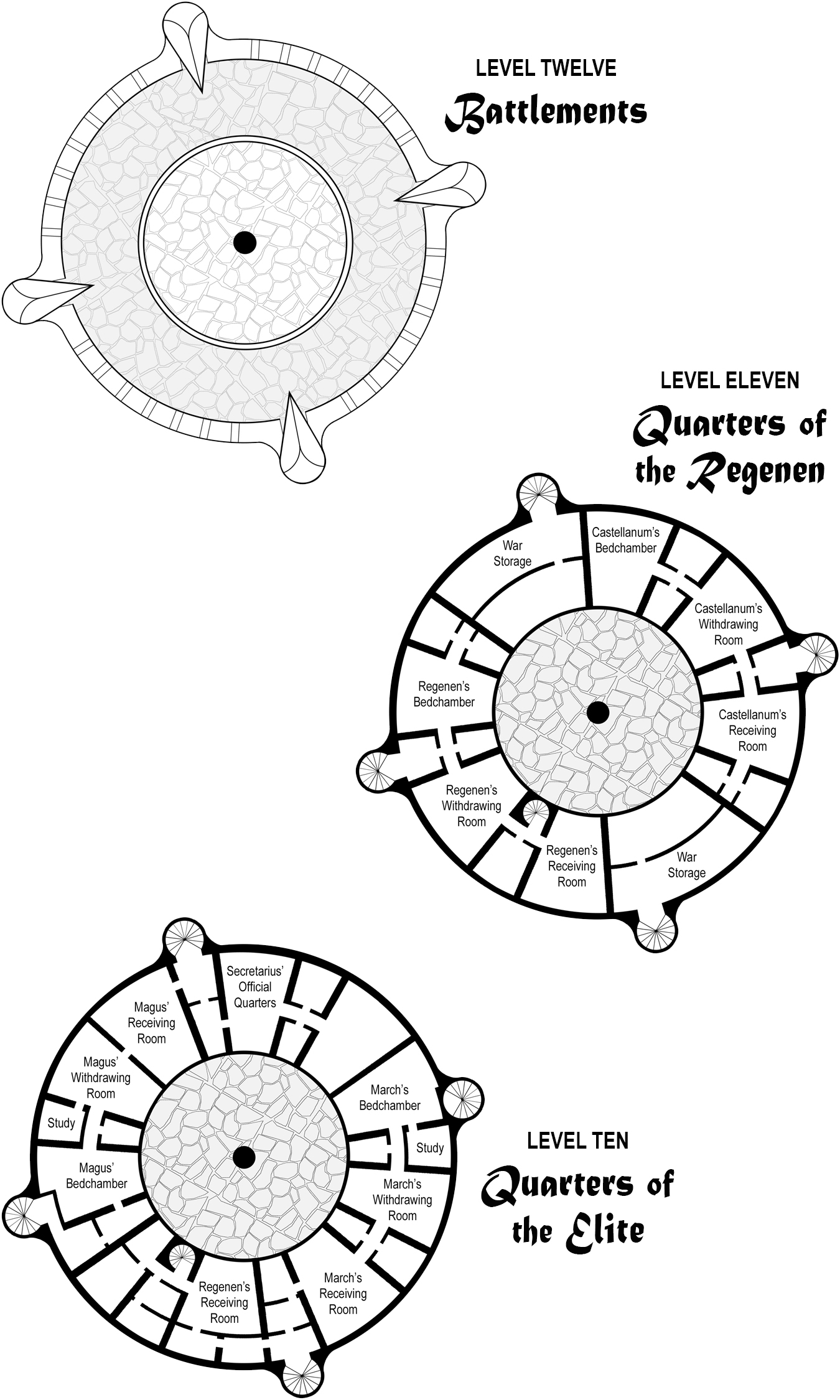 Another turning point in the story occurs on the terrace ringed by the quarters of the elite. Carbraes and the general who commands his legions (the March) are enjoying a rare moment of conversation and leisure under the summer sun, when Gael brings them startling news.

The tower of Belzetarn possesses three great halls. Too many trolls dwell in the citadel for one hall to hold them all, and even so, many of the craftsmen and craftsmasters dine in the mess halls of their lodges, located in the artisans’ yard or the bailey. 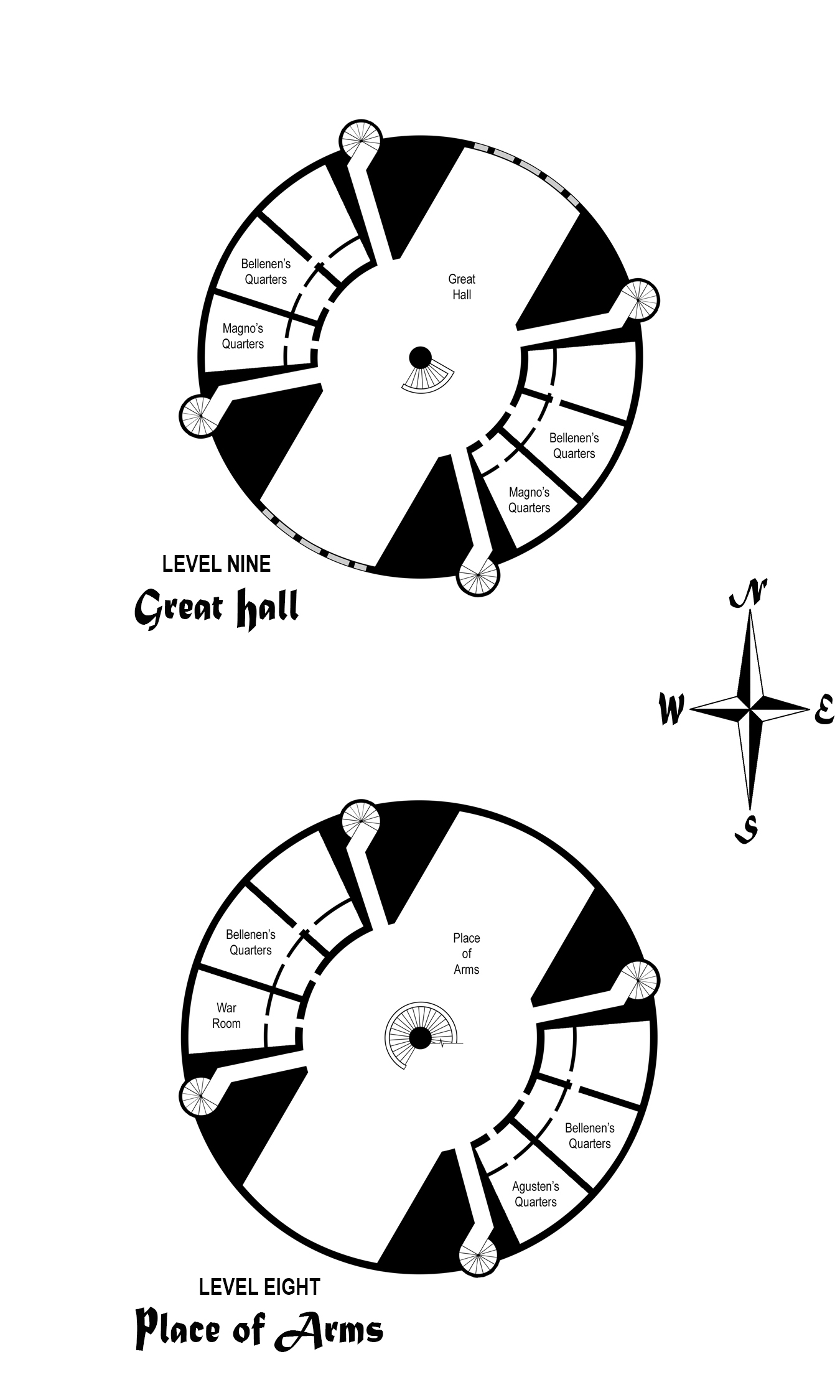 The topmost hall (level nine) serves as the official hall of the regenen, the warlord who rules the citadel. But Carbraes’ practical instincts push him to dine in company with more than the elite, and thus he randomly takes some of his meals in the middle great hall (level six) and the lower one (level five).

When Gael goes seeking the castellanum one evening (the castellanum manages the domestic concerns of the citadel), he starts by checking the topmost great hall, but comes up empty. The middle great hall is equally bereft of the highest officers. Carbraes dined in the lowest great hall that night, and the castellanum, perforce, dined there with him.

For more about the world of The Tally Master, see:
Gael’s Tally Chamber in Belzetarn
Mapping Ancient Rome onto Belzetarn
What Does the Tally Master Tally?
Map of the North-lands in the Bronze Age
The Fortress of Belzetarn
The Dark Tower
Belzetarn’s Smithies and Cellars
Belzetarn’s Formidable Entrance Gate
Belzetarn’s Treasures
Bronze Age Swords
Brother Kings

When I made the (vague) plan to share my floor plans for Belzetarn’s tower on my blog, I envisioned a vast spill of drawings showing all of the main levels. But when I opened my computer to write the post, I realized that just as the proverbial “wall of text” is unappealing, so is the “wall of floor plans” a bad idea.

I almost scrapped the whole thing.

But… but… but! Floor plans are cool! I bet some of my blog readers would like to see them!

How do you spread the waist-high pile of mulch? One shovelful at a time. How do you make the long journey? One step at a time. I would not try to show the whole tower in one go.

Plus, I could then talk about what’s on each level, which would be fun.

So, here are the lowest levels of the tower and the kitchen annex. 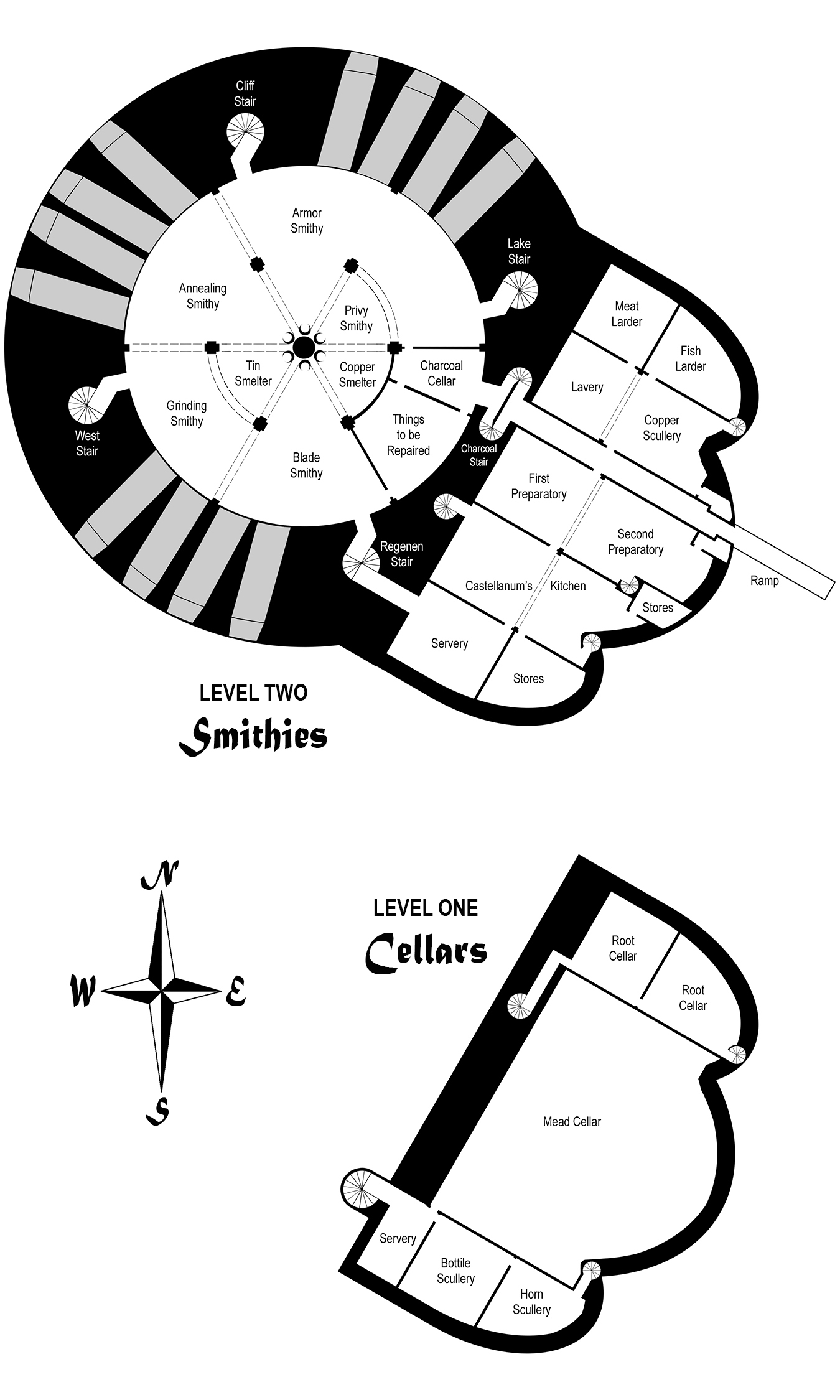 The cellars under the kitchens are a little lower than the smithies inhabiting the roots of the tower proper. Two separate stairs give access to the root cellars, but the mead cellar deliberately has only one locked entrance. No illicit tapping of the mead barrels allowed!

Many of the drinking vessels used at table are made of horn (much more delicate than the pottery bowls and copper cooking pots) and possesses special cleaning requirements. Thus there is a horn scullery devoted to washing drinking horns! The leather bottiles in which mead is carried to the great hall, where it is served, also posses their own scullery.

The Castellanum’s kitchens, right above the cellars, prepare food for the bulk of the denizens in Belzetarn. The Regenen’s kitchens (one more level up and not on this floor plan) handle the fancy dishes reserved for the high table where the warlord and his elite officers dine.

The smithies occupy the great stone vaults at the foundations of the tower. They are shadowy spaces, lit by the fires in the forges and echoing with the shouts of the smiths and the ringing of hammers on metal. The color of heated bronze – or copper or tin – indicates its temperature and when it is hot enough to be worked, so strong sunlight would be a hindrance.

For more about the world of The Tally Master, see:
Gael’s Tally Chamber in Belzetarn
Mapping Ancient Rome onto Belzetarn
What Does the Tally Master Tally?
Map of the North-lands in the Bronze Age
The Fortress of Belzetarn
The Dark Tower
Belzetarn’s Formidable Entrance Gate
Belzetarn’s Treasures
Belzetarn’s Great Halls
Bronze Age Swords
Brother Kings

My inspiration for The Tally Master came as a sort of vision, although “vision” is a misnomer, given that the sense of sight had little to do with it.

I felt as though I were Gael as he sat in a small and gloomy chamber hollowed from the thick stone wall of a dark lord’s dark tower, hunched over a parchment, quill scratching tally mark after tally mark.

There wasn’t much light, just flickers of firelight and shadows and the sensation of great weight pressing my shoulders down and my spine into an uncomfortable curve, while sound filled the air around me.

The roaring of great forges deafened me. The clanging of smiths’ hammers on beaten bronze clamored. Sudden shouts made my heart contract in alarm. Spurts of running footsteps pounded in a nearby stairwell.

Gael and the sounds of his setting seemed very real, and I wanted to tell his story. I knew that he was a troll and that he managed the wealth – the metals – for his dark lord, but I didn’t know much else.

So I engaged in the process that has become so familiar and effective for me over my years of telling stories. I asked myself question after question, made extensive notes of my answers, and drew bunches of maps and floor plans. Over several months, I came to know a lot about Gael, about his overlord (not quite the typical “dark lord” at all), and about Belzetarn, the citadel that was their home.

In my initial stabs to make Belzetarn match the feeling I had for it, I placed the kitchens in the tower proper, which was utterly wrong. I was so relieved when I realized that they were located within a sort of annex slabbed onto the lower southeastern side of the tower. Once I got that piece, the rest of the fortress almost fell into place by itself, although it took me a while to draw it all.

My goal was always to sculpt the physical form of Belzetarn to express the mood and the ambience of my initial inspiration. 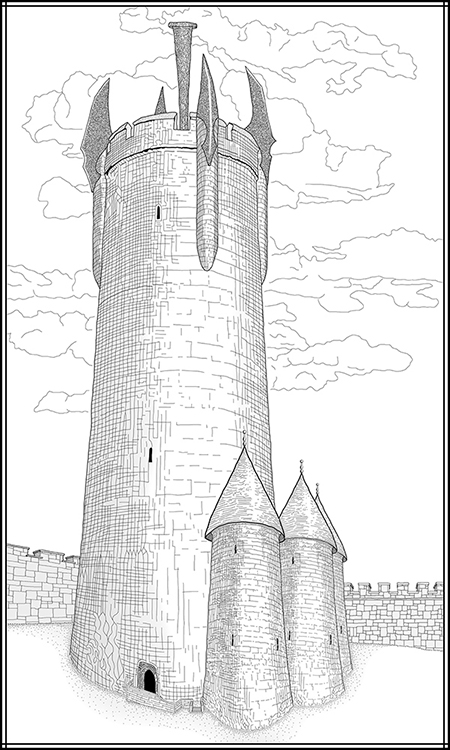 The style of this drawing doesn’t truly hit the mark. The photo at the beginning of this post does that better. But the design of the tower itself is close to right. It’s tall – very tall – it’s dark, it possesses clawed protrusions at the top and a lumpy, spiky annex on one side. Plus, all the chambers and offices are in the right place, as you can see when you slice the tower in half. 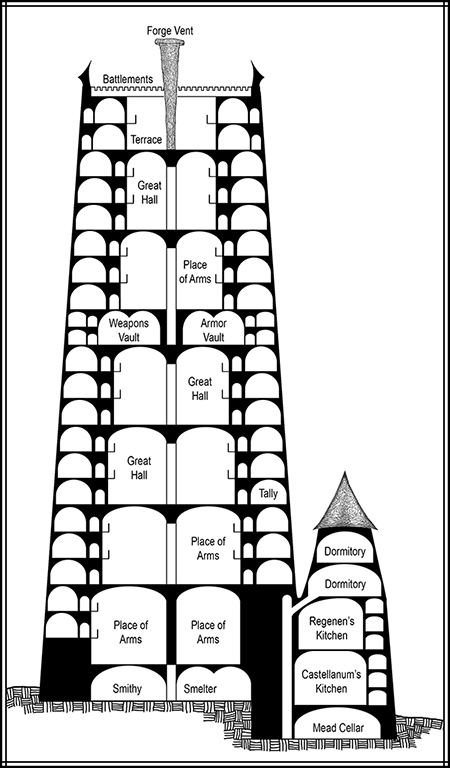 Belzetarn – the fortress in which The Tally Master takes place – occupies the top of a bluff above a lake in the Hamish wilds.

I envision the landscape as looking a lot like that of Telemark, Norway, although Belzetarn would be much closer to the lake than the vantage point in this photo.

Belzetarn’s outer bailey possesses room enough to permit an entire cohort (600 warriors) to practice drills. Stables, kennels, the hunters’ lodge, the gluemaker, and many other offices line its curtain walls.

The artisans’ yard, located along the cliff edge, is smaller, but encompasses the hospital, the felterers, the harnessmakers, the woodcarvers, and so on.

Belzetarn’s tower, erected by potent troll-magery long before Carbraes came to rule it, dwarfs both yard and bailey because of its extreme height, more than 300 feet (~90 meters) from the foundations to the battlements. 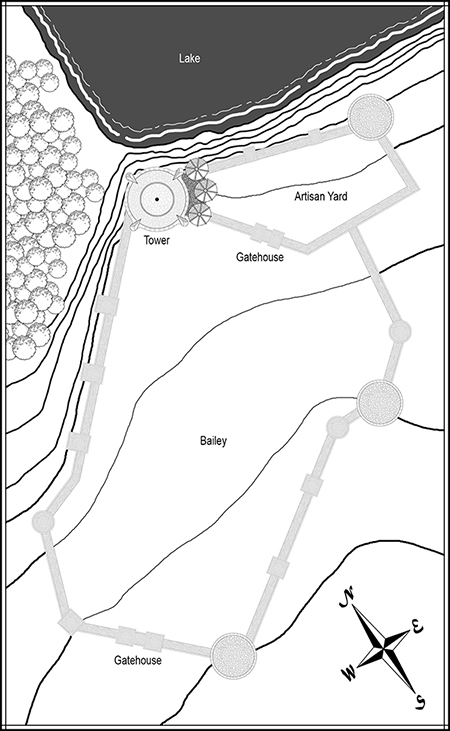 The Tally Master is so close to its release that I can almost taste it! I’d hoped to click the publish button this week, but…no. Next week is looking good though. 😀