I’m in the midst of writing a short story inspired by seven tapestries created in the late 1400s to depict the royal hunt of the unicorn.

The tapestries are gorgeous, although historians have thus far proven unable to identify the original patron and tapestry workshop from which they came. The first recorded mention of them has the works hanging in the Paris home of the de la Rochefoucauld family in 1680.

Nor is there agreement on the symbolism of the story told. Perhaps the hunt depicts two beguiled lovers, the knight represented by the unicorn, the lady by the maiden. Perhaps the hunt is an allegory for the Passion of Christ. Or perhaps both stories are present, each enriched by the presence of the other. 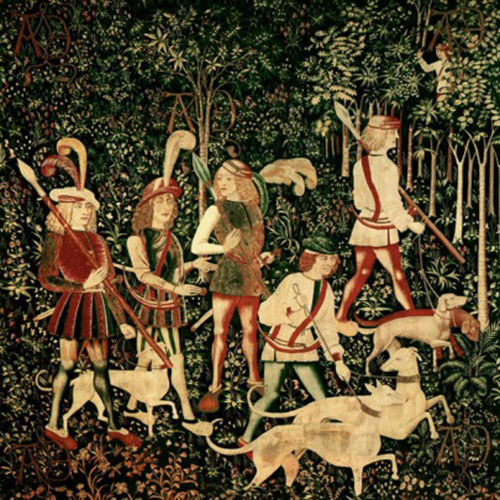 The first of the seven tapestries depicts the start of the hunt, when the hunters and their hunting dogs are ranging through the forest, hoping to catch sight of the mythical beast they will pursue.

So…how did I come to be writing a unicorn tale?

It all started with story bundles. A number of my stories have been included in a series of bundles entitled Here Be…

“Crossing the Naiad” appeared in Here Be Ghosts. The Troll’s Belt is part of Here Be Fairies. And all three of my dragon stories feature in Here Be Dragons.

Alex Butcher curates these fine collections, and she has several new ones planned for 2019. Here Be Unicorns will release in March or April. When she asked me if I had a story that would fit its theme, I had to confess that I did not.

But her query got me thinking. Why didn’t I have a unicorn story? I should! I couldn’t stop thinking about it, and soon an idea bloomed. After I’d scribbled four different outlines in my journal (three of which were too long), I realized I needed to take my longing to write about a unicorn seriously.

I started writing this week. 😀

Update on The Sovereign’s Labyrinth

The second of the Gael & Keir Adventures is in good shape. In fact, it is in the hands of my first reader. She’s read the first few pages, reported that she was gripped by the opening, and is eager to read more. I like hearing that!

It’s time for me to reserve a cover for the book from Deranged Doctor Design.

I’ve already been thinking about the next adventure. I’ve actually written the opening scene, and I have a tentative title. Deepearth Rising. I’m just as excited about it as I was about Sovereign.

I’m not quite ready to post a progress bar for Deepearth Rising, because I need to transform the mass of ideas I have for it into a coherent outline. Usually I do this before I write the first scene. But the first scene was just here in my head, and I wanted to write it while it was fresh. So I did!

But I plan to finish my unicorn story before I do more work on Gael & Keir Adventure 3. I’ll tell you more about it as I make progress! 😀

The Here Be Dragons bundle has three of my titles in it!

They stalk our myths and hunt our past—dragons—humankind’s greatest and oldest foe. Good, bad, legendary and deadly. Dare you enter the dragon’s lair?

Thirteen tales of dragons, their friends and their foes. 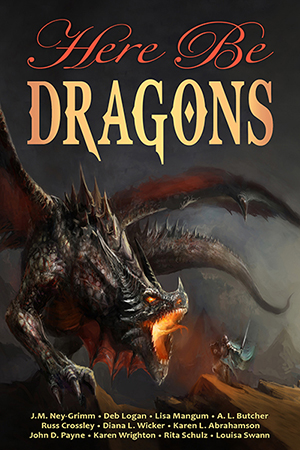 The Crown and the Dragon
by John D. Payne
Dragon Writers (an anthology)
edited by Lisa Mangum
Of Blood and Scales
by A. L. Butcher
Devouring Light
by J.M. Ney-Grimm
Ascension of the Whyte
by Karen Wrighton
Of Dragons and Centaurs
by Deb Logan
Night of the Clockwork Dragon
by Louisa Swann
The Legend of G and the Dragonettes
by Russ Crossley
The Dreamweaver’s Journey
by Diana L. Wicker
Graybill by Rita Schulz
Star-drake by J.M. Ney-Grimm
Like At Loch Ness by Karen L. Abrahamson
Winter Glory by J.M. Ney-Grimm

The Here Be Dragons bundle (with 13 titles) is available at Amazon, Barnes & Noble, Kobo, iTunes, or direct from the BundleRabbit site.

For more bundles with my stories in them, see:
Eclectica
Here Be Unicorns
Here Be Merfolk
Here Be Fairies
Immortals