I’ve kept a journal since 1980, and I’ve used to-do lists for longer. But both of those tools have evolved considerably over time.

The journal was originally a way to think about my feelings, so that I could try to make sense of them. The to-do lists were written on loose scraps of paper, with the various items being crossed off as I did them or being transferred to fresh scraps of paper when the original one grew too crowded.

Those simple systems worked, although I always had a feeling that there might be a better way. (But not one of the myriad organizers available for purchase, which were far more complex than I needed.)

My two systems started to merge about 9 years ago. I’d scribble short lists on the edges of my journal pages, drawing a box around the list to make it easier to find when I needed to refer to it. I still wrote my feelings out – a good tool – but I didn’t need to do it as often. The contents of my journal tended to be ideas for my future combined with brainstorming and notes on whatever novel I was writing at the time.

When I wanted to refer to either my plans for the future or my story notes, it was a real pain to locate the right page with the right information. Often, I couldn’t find the information at all.

I started labeling pages that I knew I would want to refer to again, and drawing a box around the label, so that it didn’t fade into the wall of writing.

But I wished I could find it more efficiently.

(In the image above, the ideas for the Devouring Light sequels were farther down the page. That’s why the label does not match the text. I didn’t need to label my plans for the Fate’s Door cover, because I won’t need to refer to those thoughts later. I’m working on the cover revision right now!)

Then a friend suggested I type up a table of contents whenever I filled a blank book. I liked that idea and tried it, gluing the TOC into the flyleaf of the journal.

It was awesome! I could check the TOC and flip right to the pertinent info.

Except, it was a pain numbering all 254 pages in one go. Plus I had to actually create that TOC.

I learned to number the pages as I went, but I tended to drag my feet in typing up the TOC. It was such an unappealing chore. And then I needed to make sure I hadn’t run out of rubber cement to glue the dang thing in.

I loved the results of the TOC, but I often had two journals lingering without them. And, of course, it was the more recent journals – the ones missing TOCs – that I needed to access the most.

Such was the state of things when I stumbled across the concept of a “bullet journal”- so named for the bulleted lists that appear within it. 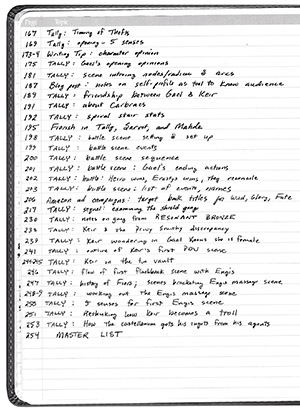 One important element of a bullet journal is that the first few pages are left blank!

So that, as you write in your journal and realize you are writing something you’ll need to refer to again, you can write the page number (or numbers) and the topic on a line in those deliberately available first pages. You create the TOC as you go!

It seems like a perfectly obvious solution to my TOC problems, but I don’t know when (or if) I would have thought of it myself.

I jumped on it, even going so far as to type a TOC for the first 77 pages of the current journal and then add blank lines for future entries, so that I could start with the create-as-you-go TOC immediately. I didn’t want to wait until I started a fresh blank book. I’m glad I didn’t wait. It has been marvelous. I can find everything I need with no trouble, and jotting down the page number and topic is easy peasy.

The sample page above (that I scanned from my February – April, 2016 journal) has mostly entries for my novel-in-progress, Tally the Betrayals. Yes, I’m a little obsessed. 😀

It was the method of handling the TOC that thrilled me, but I’ve found some of the other bullet journal tools to be useful as well. Instead of scribbling my to-do lists in the margins, I allow them a more generous space. But I don’t feel compelled to set them at the beginning of an entry. Nor do I create one every day.

As I read what various bloggers had to say about bullet journals, it seemed clear that their number-one feature was their customizability. Everyone recommended using only those bullet journal tools that suited you.

So I adore the TOC, and I use it. I like to-do lists on busy days, but I don’t need them on days when all I do is write. 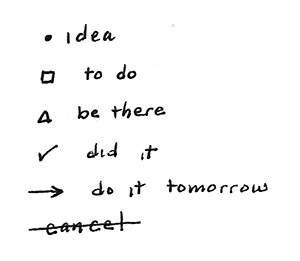 I like a small subset of the symbols developed for use in bullet journals. The empty box = something to do. The empty triangle = somewhere to be. The check mark means I got there or did it. A bullet = an idea, such as a new recipe I want to try. A line through an item means I decided I didn’t need (or want) to do it after all. And – my favorite – an arrow through a triangle or a box means I moved the task or the appointment to another day.

The fact is that some things are best done later or skipped altogether, and the bullet journal system plans for it. I love that! I might think I need to do laundry today, and sometimes I do. But if I’m exhausted when laundry time rolls around and everybody has clean clothes to wear tomorrow, it’s fine to push laundry until later. 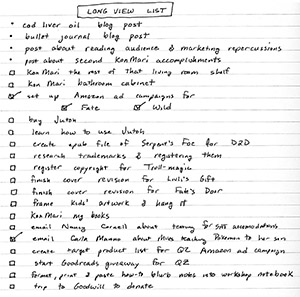 The other item I find helpful is the “future list” or “master list.” This consists of tasks and ideas that I’ll need or want to do in the future, but that are not right for today. For example, I write down ideas for blog posts on my list, as well as things such as a note to purchase Jutoh (software for creating epub ebook files).

If I eventually decide I don’t want to purchase and learn Jutoh after all, I can simply draw a line through it on my “long view” list, before it ever migrates to a to-do list.

Many bullet journalers suggest putting the master list immediately after the TOC. I knew I would hate that. I allow 3 pages for my TOC. Flipping through them to get to the 4th page every time I want to check my master list would make me crazy. I put it on the very last page of the blank book. No flipping needed at all. I just open up the back cover.

Some bullet journalers create really decorative journals that rival scrapbooks. They use washi tape, draw sketches, and include photos. And I gather there are many more tools and systems than those I’ve discussed here. But simple, practical, and functional is what works for me.

Here it is at the end of the day: a bunch of stuff done and checked off; two items moved to tomorrow. 😀

The bloggers whose info on bullet journals I found most helpful:
The Art of Simple
Carrie Willard
The Lazy Genius Collective