I have a confession to make about me and research.

Very little of what I delve for ever makes it directly onto the pages of my stories.

Blood Silver is a perfect case in point.

This is my 12th post about Blood Silver. Of those 12 posts, 8 concern swords, armor, and fighting techniques. Given the proportion of posts devoted to the paraphernalia of battle versus those on other topics, you might easily assume that Blood Silver is a war story, with scene after scene transpiring on the field of battle.

It takes place during a time of war, yes. And the war plays a central role in the challenges my protagonist faces. But out of the 39,300 words that comprise the novella, 3,900 narrate the battle scenes. Roughly 10 percent.

So why do I do all this research? (And why do I write so many blog posts on it?!) 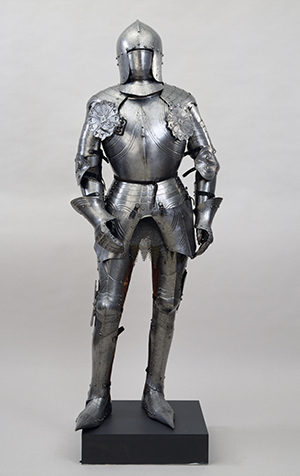 This is why. I become my character while I write his or her story. And I couldn’t thoroughly become Tahaern, a knight, unless I had an equally thorough understanding of the conditions of his life.

Sometimes the research I do for one novel will prove useful for another one that I write later. For example, I did a bunch of research into medicinal herbs when I wrote Troll-magic. And I remembered enough of it that I didn’t need to research it all over again in order to handle Tahaern’s healing skills.

But for his knightly skills, I didn’t know enough. Thus, research!

Now, as to why I blogged about all my research?

Well, I research because I need the knowledge, but I also enjoy learning about new-to-me topics. I generally find the lore I discover to be fascinating, and that was exactly the case with the knightly gear and the knightly fighting skills. Of course I wanted to share all that cool stuff with you!

So, what about plate armor?

I’d found re-enactors, living history buffs, and experimental archeologists to be such great sources for swords and sword fighting that I turned to them again regarding plate armor.

The first video I found prompted more questions than it answered. But having the right questions is very helpful, indeed. Plus the knight portrayed has such cool armor (and the music accompanying his arming video is so dramatic and majestic).

I’m going to share that video with you as an excellent (and short) intro.

Couldn’t you just imagine living in that castle yourself? Don’t you wish you had armor like that? I do, almost.

One of the things the video makes clear is just how many straps plate armor possesses. Each piece is firmly fastened to the appropriate body part, and thus the weight is distributed over the whole body. It does not all hang from the shoulders or rest upon the feet. That’s why those knights had good mobility, even when encased in all that steel.

Which raises the question: how exactly is each piece fastened to the knight’s body? It looked like there was more to it than just buckles.

Historian Mark Griffin reveals the mysteries of “points” or laces.

I loved his arming jacket with its multitude of laces. And I found his remarks about the English knights riding to battle and then dismounting to fight to be most curious. I’m longing to know why the continental knights, who fought from horseback, had such a different style from their English counterparts.

The fact that the knights wore a different style of visor for jousting tournaments than for battle makes so much sense. That’s exactly the sort of thing I love discovering in my research.

Matthew Fields, a member of the Plantagenet Medieval Society, spoke most enlighteningly near the end of the video about his experiences in tournaments. He says that when’s he’s in combat, he does not notice the weight of the armor at all.

Mark Griffn and Matthew Fields answered many of the questions I’d developed, but they also prompted yet more questions. How exactly did all those separate pieces of armor fit together? In what order did a knight put them on?

Fortunately I found a presentation by The Metropolitan Museum of Art that featured a gentleman who is both a re-enactor and an armorer. Now I was really getting down to it. This video delivered the full scoop!

Wasn’t it cool how Jeffrey Wasson had full mobility in his arms? And could scramble up from the prone position? It was helpful hearing all the clanking and rattling produced as he threw mock punches at the air and stepped quickly. So that is what Tahaern and his squires sounded like!

But I still had one more important question.

Both Jeffrey Wasson and Mark Griffin said that a knight donned his armor starting with the feet. But every single example I’d seen showed the knight in question starting with the greave that protected the shin and calf. And they did not put on the sabaton that covered the foot at all. What did that mean?

I understood that the sabaton was often not worn for foot combat. It was really needed when the knight was ahorse, making his feet especially vulnerable to infantry.

But when a knight did put on his sabatons, did he put them on before he put on his greaves? Or after?

Knyght Errant showed me the answer when he decided to time himself getting armed. Just how long does it take a knight to get his plate armor on properly?

And there we have it: another myth dispelled and my question answered!

For more about Blood Silver, see:
Cross Strike, Squinting Strike, and Scalp Strike
The Book Title
The Crooked Strike
The Joust
Which Cover to Choose?
The Strike of Wrath
Rope Climbing and a Cliff
What If the Sword is Wrong?
A Song of Peace
Wielding a Long Sword
Origin of the Story (The State of This Writer)