Twenty-five years ago, a fairy tale saved … well, what did it save?

Possibly. The danger was real.

Me with the challenge of removing two children from risk as swiftly as possible without becoming a shrew? Indeed!

So how did this fairy tale salvation come to pass?

It all started at Crabtree Falls. 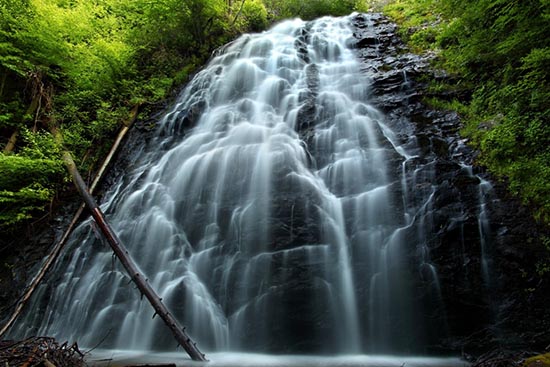 The falls form an amazing series of cascades down a precipitous mountainside in Virginia’s Blue Ridge. The sheerest curtain of water, a drop of 400 feet, occurs at the very top where the stream hits the brink. White water and smaller cascades spurt from a second fall below the first one’s landing pool and then gentle to become a bright race flowing downhill fast.

The hike to the top is quite a climb. Possessing numerous hairpin turns, the path is ladder-like in spots and very steep everywhere else.

A dear college friend of mine – we’ll call her Aliana, to protect her privacy – invited me to visit the falls along with Eillis and Beatice, the two young daughters of her fiancé. (More aliases. :D) 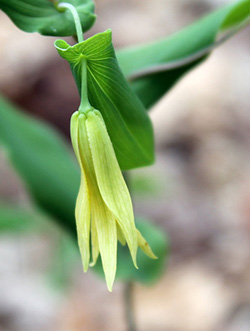 It was spring, and the woodlands displayed delicate beauty: trees leafed out in pale green, shy flowers tucked between remnant drifts of autumnal fallen foliage, and the lace of the tumbling stream sluicing toward the valley floor.

Eillis was only four and “Bea,” just eight, but they were experienced hikers, accustomed to long walks and vigorous exercise with their outdoorsman father. I heard none of “I’m tired” or “I want to go home now” or “Are we there yet?” No, the girls were enjoying the climb as much as Aliana and I were. Young, strong legs on all of us!

The top, after two hours of ascent, was glorious! The stream ran swiftly, but smoothly through sparsely spaced saplings and then out across a grassy open space to rocks. Next, the brink! And the plunge to the pool below. The view from the grassy glade showcased the ridge on the other side of the valley, a panorama that delighted my unexplored inner landscape painter. The vignette at the base of the falls was harder to appreciate. Access for the trail wasn’t possible (and leaving the trail, not safe), so we peered up past a secondary fall to glimpse the primary one. I think we hiked the path between the two vantage points several times to enjoy their differing magic! 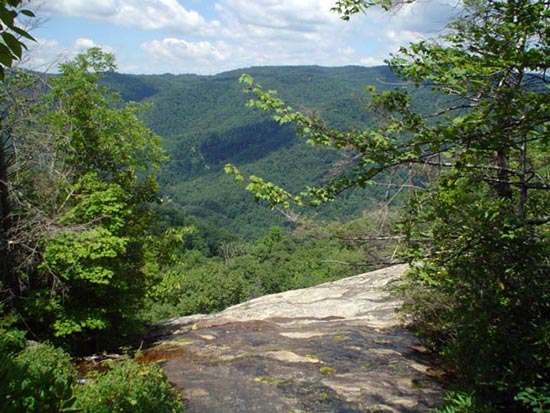 It was hard to leave. We lingered at the brink, awed by its abruptness. As we deliberated pressing all the way up the gentle slope to the crest, a dark cloud boiled over the ridge.

Ah, yes. Traditional weather in the mountains of Virginia. Clear, blue, and sunny on one side of the ridge, pouring rain on the other.

This cloud wasn’t dropping rain, but it had an ominous look: pale gray on its edges, darkest gray, almost black, in the main mass, and an ugly yellow halo.

Aliana and I turned as one to retrace our steps, herding the girls with us. We made it past the base of the falls before the first raindrops arrived. We traversed two hairpin turns more before the first lightning strike flashed and crashed.

Eillis whimpered, and Aliana swept her up in a swift hug. But four years old is too big for carrying down a mountain. And Bea had stopped dead, white-eyed.

Another bolt of lightning stabbed down a short way off in the woods. We stood in danger of being struck. We needed to get down off that mountain! Fast!

“Have you ever heard the story of the twelve dancing princesses?” I asked.

Two heads shook from side to side. No, they hadn’t.

“It’s a good one! Would you like me to tell it while we walk?”

Eillis had relaxed enough that we could shift her around to piggyback. And Bea grabbed my hand when I offered it.

Then we ran. (I know. That carries risk too. Young ankles!) 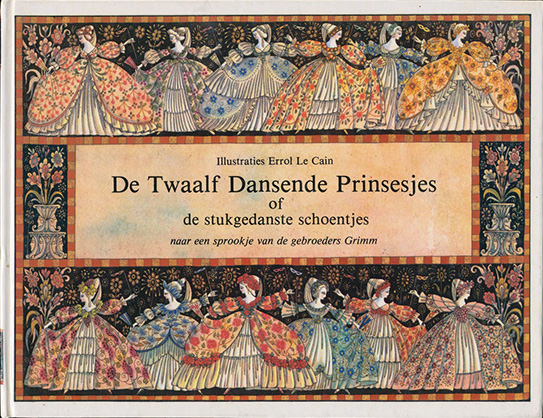 Introducing the mystery of the twelve pairs of tattered dancing slippers got us another three hairpin turns downhill.

The youngest son seeking his fortune – meeting an old wisewoman with two magical seeds and good advice – took us to the third cascade in the rushing stream.

The fortune-seeking youth acquiring a spot as gardener on the castle grounds, using the magical bay laurel plants to garb himself as a prince, and then invisibly following the twelve princesses through enchanted forests of copper, silver, and gold ushered us to the rolicking brook on its gentler slope, along with the long-delayed downpour.

The lightning strikes stayed behind us on the upper slopes and we arrived at our vehicle safe, but soaking wet. A bedraggled blanket partially dried Eillis and Bea. Once the car engine warmed up, we cranked the heat on high.

The drive to the girls’ cabin took just the right amount of time. I told of the underground crystal palace and the ball there, then the two additional nights when the gardener boy followed the princesses to their secret revels.

As we turned into the cabin driveway, the rain stopped, and I was ready to intone the words: “They lived happily ever after!”

Our adventure was complete.

Have you ever been caught in a thunderstorm on a mountain or other exposed situation? How did you make it to safety? Any story telling involved?

Warning: If you ever hike Crabtree Falls yourself, please do not try to reach the vantage point shown in the first photo on this post. It’s lethally dangerous. “Forest Wander” (the photographer) was lucky. Many other intrepid hikers have not been. Twenty-eight people died – one just last month – when they left the trail and climbed too close to the falls. Don’t be a casualty!