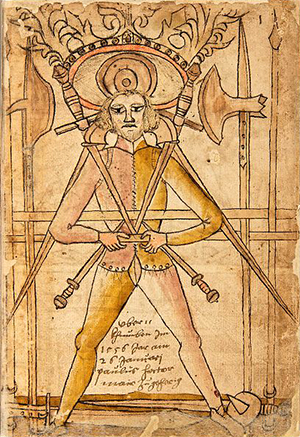 Learning martial skills from the past is popular these days.

Re-enactors enjoy it as a hobby. Living history enthusiasts include it as essential to understanding the daily lives of the people of the past, from the times of the ancients through the medieval period and on to the more recent past.

Experimental archeologists understand that there is nothing like re-creating the technologies of the past and using the implements produced by them to generate a thorough understanding of history and the cultures of history.

So there are a lot of people studying the European martial arts (among other things).

The foundations of such study are manuals from the time, such as Flos Duellatorum in Armis by Fiore dei Liberi (an Italian manual) and Fechtbuch by Hans Talhoffer (a German manual).

Neither language is appropriate for the fantasy world of Blood Silver, so I created my own French-influenced names.

The Coup Croisé or Cross Strike

The cross strike is a horizontal blow, often aimed at one’s opponent’s head. It offsets an incoming strike from your foe at the same time as delivering a strike of your own.

The video immediately below from Laurel City Historical Fencing is short and sweet (just over a minute) and shows it perfectly.

I liked how the instructor started slow and sped up closer to fighting speed. The strike itself moves from an ox guard to another ox guard on the other side, and it can be chained together in a series of cross strikes just as this swordsman demonstrates.

The Coup Étroit or Squinting Strike

The squinting strike collects an incoming strike from your enemy, sets it aside, and then strikes your foe. It is similar to the cross strike, but vertical rather than horizontal.

Here’s another short, sweet video (from Dreynschlag) showing the strike.

And now I know the correct pronunciation for the German term for the plow guard. Pflug. 😀

For the scalp strike, one raises the sword hilt high while levering the point downward to threaten one’s opponent’s face. In the video below, Aaron Harmon demonstrates succinctly that the strike avoids over committing.

The sound is a little uneven at the very start of the video (another short one), but evens out rapidly.

While I was seeking out videos for each of the three strikes presented here, I stumbled across a sword duel acted out with great panache by the Akademia Szermierzy. I bet they had fun making it.

It includes vignettes from an Italian manual with the Italian terms. (Only fair to give the Italian some air time after all the German.) 😉

The fighting is dramatic and the music is wonderful, so I’ll share it as the close of my sequence of long sword fighting posts.

For more about Blood Silver, see:
Plate Armor, How It Works
The Book Title
The Crooked Strike
The Joust
Which Cover to Choose?
The Strike of Wrath
Rope Climbing and a Cliff
What If the Sword is Wrong?
A Song of Peace
Wielding a Long Sword
Origin of the Story (The State of This Writer)