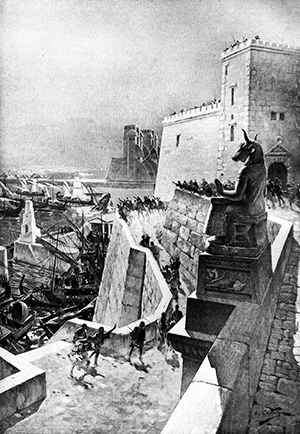 The ancient Phoenicians were seafarers, and they created the first real maritime civilization in the Mediterranean Sea around 1550 BC.

The ancient Egyptians had mounted various sea expeditions earlier, but the Phoenicians established regular trade routes between their numerous city-states, from Tyre in the east to Tingis in the west on the Strait of Gibraltar, and everywhere in between.

Thus the Phoenicians were the first to develop truly sturdy, seaworthy ships and all the arts that go with shipbuilding and sailing. The later Mediterranean civilizations learned from the Phoenicians, and individual sea captains recognized the Phoenicians – even after their dominance faded – as masters of the sea.

The first warships – needed to protect the sea routes – were slim craft with a shallow draft and propelled by oarsmen, but possessing a sail to take advantage of favorable winds when possible. The ancient Greeks named these warcraft for the number of oars propelling the vessel.

Thus the early 30-oared warship (15 on each side) was the triaconter, from triakontoroi or “thirty-oars.”

And the later 50-oared warship (25 on each side) was the penteconter, from pentekontoroi or “fifty-oars.”

By the time of my novel Fate’s Door (352 BC – 329 BC), warship technology had advanced considerably. The early warships served more as fighting platforms for the warriors, who would seek to board an enemy ship and subdue its warriors in man-to-man combat. Later warships had catapults aboard for assaulting the enemy with missiles. Even more important, their prows possessed bronze-clad rams for ramming enemy ships and sinking them.

These were peerless warships, and the ancient Greek city-states built fleets of them, cementing the Hellene domination of the Mediterranean Sea. 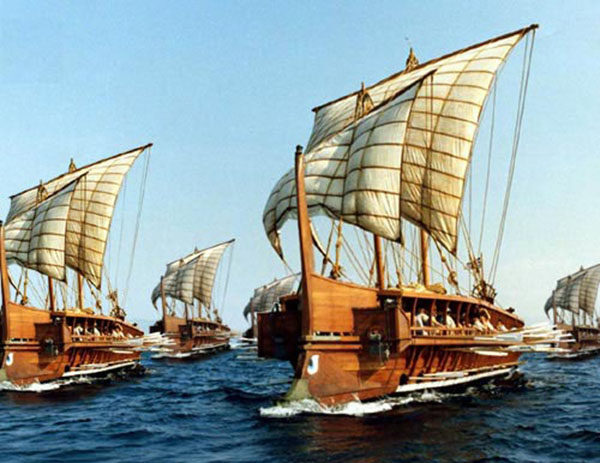 As history unfolded, the desire for ever more powerful ships grew. Adding a fourth bank of oars was impractical, but adding another man to each oar was not. When the extra man sat on the top bench, the ship was known as a tetreres or “four-rower.”

Altairos boasts to Nerine (the protagonist of Fate’s Door) that each of his father’s warfleets has at least one penteres, reassuring her that he will not be in danger when he accompanies the fleets to challenge the pirates preying on their trade ships. 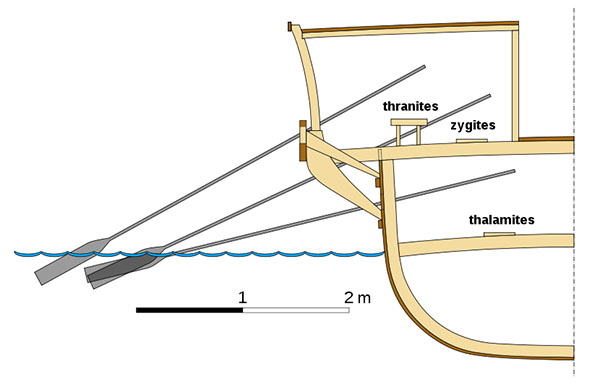 The diagram above shows the rowing arrangement for a trieres. One thranites sat on the top bench with his oar passing through a lock in the side of the projecting outrigger of the ship.

One zygites sat on a middle bench, recessed into the deck, with his oar passing through a lock in the floor of the outrigger.

And one thalamites sat on the lowest bench with his oar passing through a lock in the side of the ship.

In 1985, the reconstruction of an ancient trireme was started by a shipbuilder in Piraeus, using drawings by naval architect John F. Coates. Coates developed his drawings through long consultation with historian J.S. Morrison. 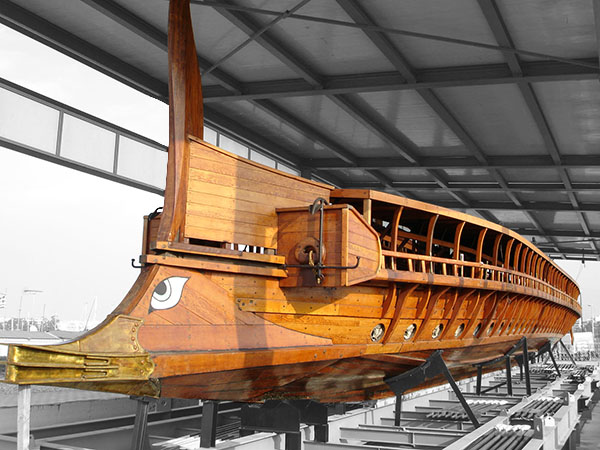 In 1987, the Olympias was launched and put to sea trials. In the most successful of these, the ship achieved a speed of 9 knots (10 mph or 17 km/h). It was able to execute 180-degree turns in less than 60 seconds and within an arc of two and a half ship-lengths.

Given that this maneuverability was achieved with an inexperienced crew of volunteers, there was reason for the enthusiasm of the ancients for the trireme. It was indeed the “Dreadnought of the Mediterranean.”

For more about the world of Fate’s Door, see:
Ground Looms
Lapadoússa, an isle of Pelagie
Merchant Ships of the Ancient Mediterranean
Garb of the Sea People
Measurement in Ancient Greece
Horse Sandals and the 4th Century BC
Knossos, Model for Altairos’ Home