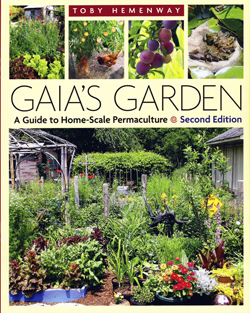 First, I have a confession to make. I read Gaia’s Garden and was so impressed I immediately started a to-do list of chores for my own garden. But that’s not the confession. It is this: just as I was gathering materials and gearing up to create my first sheet mulch, I took an unfortunate and ill-timed bicycle ride and broke my foot! Perhaps you see where this is going. The break was a bad one, but not bad enough for surgery and pins, so I was bed-ridden all last summer and on crutches all last fall and in physical therapy all last winter. In other words, I have not yet done a single one of those garden chores. But I’m going to tell you three cool things from the book anyway!

Before I go further, Gaia’s Garden is written by Toby Hemenway and introduces home gardeners to permaculture and how to use its principles on their land. Now for those three things.

Consider the time-honored, conventional vegetable plot. The plants in it are useful, yes, and their color and the texture of their foliage, beautiful. But now look at those rows and the paths between them. Not only are they visually uninspiring, but they waste a lot of space! We can do better.

What about raised beds with paths threaded between wider blocks of plants? Definitely an improvement, but we can do better still.

Now evaluate the keyhole garden. The amount of ground devoted to paths shrinks further, and the space for plants burgeons. There are other shapes taken from nature that conserve fertile soil: the herb spiral, branching systems, and nets or mesh patterns. They’re all worth keeping in our palette when we design the layout of our gardens.

Nearly every gardener can wax lyrical on the value of compost. It replenishes the soil with mineral wealth. It improves the soil’s texture, building humus, the light and fluffy component that holds moisture and nutrients for the questing roots of plants.

But compost heaps are a lot of work: building them, turning them, watering them, and then carting the whole kit-and-kaboodle to the actual garden plot. And there’s another disadvantage. Soil organisms – bacteria, fungi, and amoebae – are just as important to plant well-being as the minerals and other nutrients in the soil. A thriving fungal mat might extend across an entire back yard or even further. But all that turning and forking and moving needed by a compost pile disrupts and destroys these microscopic helpers.

Just as with garden topology, there is a better way – an easier way! Mulch in place. It’s done in two steps. First lay down a thick layer of newspaper or cardboard to suppress weeds. Be sure to overlap the edges by at least 6 inches. (Weed shoots can really travel to reach a gap! Don’t leave any.) Then top that layer with a foot of bark or straw or grain hulls or sawdust or wood chips. Anything that used to be a plant, basically. And don’t be timid about the amount. This layer needs to be thick. Then wet the whole thing down and let it sit.

Fall is a great time to sheet mulch. The bed will be ready to plant in spring. What if it’s already spring and you want to try this now? All is not lost. Build your sheet mulch and then create small pockets in the sheet, about 3 inches deep. Fill the pockets with soil and compost, and plant your seeds. (Somewhat deeper pockets can be used for seedling plants.)

What will you have once your sheet mulch decomposes? Lovely, humusy soil packed with nutrients along with a tide of earthworms and millipedes and beneficial mites and fungi teeming both in the decomposed mulch and a good foot underneath. Your garden will thrive.

Among permaculture practitioners, a “plant guild” is a community of plants and animals living in a pattern of mutual support. It is often centered around one major species. And it benefits humans while also creating habitat. Plant guilds are more complex than companion planting (such as placing marigolds between broccoli rows to keep insect pests away). Plant guilds are more comprehensive than polycultures (such as growing rice and fish and ducks together).

Plant guilds attempt to borrow some of the resilience and robustness of plant communities found in Mother Nature herself. Most plant guilds are local, derived or deduced from the unique soil, climate, and species found in a specific region. But there are a few “universal guilds” that are likely to thrive in much of a continent. One of these is the apple guild. 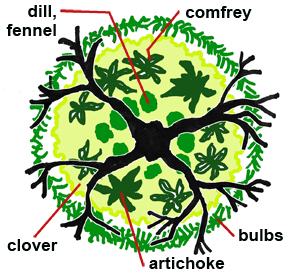 At its center grows an apple tree, although any fruit tree (or even a small nut tree) could work. Any size fruit tree – standard, semi-standard, semi-dwarf, dwarf, or mini-dwarf – may be chosen, but a larger tree will support more associated plants than a small one.

A ring of thickly planted bulbs grows at the drip line of the tree. You might choose daffodils to discourage depredations by gophers and deer. Or you might choose something edible: camas or alliums such as garlic, garlic chives, or wild leeks. (Don’t mix daffs with edible bulbs, because daff bulbs are poisonous. You wouldn’t want to risk a mistake.) Either choice will keep grasses from invading your guild.

Within the ring of bulbs is an assortment of plants that attract bees and birds, make mulch, pull nutrients deep underground to the root zone, and fix nitrogen in the soil.

A dotted circle of comfrey is the most multi-functional among these. Its purple blossoms attract beneficial insects. Its deep roots pull potassium and other minerals upward into its leaves, which can be used to infuse a medicinal tea and to create a fertilizing mulch. (Slash the comfrey back 4 or 5 times during the summer and let it fall in place as mulch.)

A couple of robust artichoke plants are interspersed with the comfrey. Their spikey roots restore soil tilth and fluffiness. The plants yield food: the artichokes. And their leaves contribute to the natural mulch.

Dotted throughout the circle of the guild are bursts of yarrow, trailing nasturtiums, and the umbels of dill and fennel. Yarrow is a nutrient accumulator, making nitrogen, phosphorous, potassium, and copper available. It is also an insectory, attracting ladybugs, hoverflies, and parasitic wasps (that eat the larvae of pests such as borers and coddling moths). Dill and fennel attract these beneficial insects plus lacewings, and they are edible.

A dense carpet of white clover laps between all the plants along with a sprinkling of dandelion, chicory, and plantain, giving the guild plenty of nitrogen-fixing (the clover) plus more nutrient accumulators. (Chicory yields potassium and calcium; dandelion adds magnesium, iron, copper, and silicon to the mix; plantain, manganese and sulfur.)

The apple guild is a dynamic system with most of its members playing multiple roles and immensely lightening the work load on its human caretaker.

Two years before I read Gaia’s Garden, my husband and I planted an apricot and a pair of cherry trees in our backyard. One cherry succumbed to the nibbling of deer, and we replaced it. The other trees survived. This spring, the apricot showed the beginning of fruit on its branches! We hope to harvest a few for the first time this summer. But I still cherish that list inspired by this book. And I wonder: what might we see after we sheet mulch the ground surrounding the fruit trees? What eden spot might evolve when daffodils, comfrey, coriander, dandelions, and clover are growing in lush circles below the fruiting branches? I hope to find out.