Bazinthiad occupies a low peak on the coast of the Bay of Istria. The original settlement hugged the shore of an inland lake, but the building of aqueducts from the Delkan Hills to the northwest permitted the expansion of the small trading post on the Marcehaven Harbor, a natural anchorage along the bay. Recently, the invention of steam engines facilitates pumping lake water into the city supply channels. The increased reserves are encouraging new building beyond the old city walls.

The Imperial Pivot sits atop Bazinthiad’s mountain with other important civic buildings nearby. The steep slopes to the south feature terraced townhouses where dwell wealthy citizens and those prominent in government. The mansions of the nobility lie on the gentler western incline. Merchant homes and warehouses cluster near the harbor.

The older parts of city spread across the northern skirts of the Mount Epiyrus where the road from Lake Arghed debouches.

Fallon (1) Fallon is a handmaiden of the Divine Mother, Sias. She embodies the longing that urges wanderers to seek the road or the high seas. A colossal gilded statue of Fallon in her sailing regalia punctuates the high western point of land at the harbor entrance. She steers a ship’s wheel with her right hand while holding aloft a ship’s lantern in the left. The lantern – fueled still by old-fashioned lamp oil – functions as a beacon by night and in bad weather. 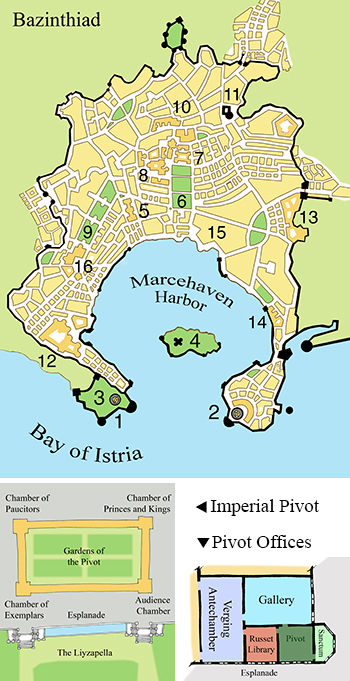 Zele (2) Zele is the handmaiden of Sias dedicated to light and clear speaking. Her portrait – another gilded statue on a towering pedestal – graces the low eastern point of land enclosing the harbor. She brandishes her traditional blazing star, a confection of crystal with a burning gas jet at its center that stays alight day and night.

Beacon Hill (3) The western point of land rises nearly fifty feet above sea level, and its shoreline features vertical cliffs surmounted by the walls of an old fortification. Cannons have long since replaced the trebuchets that originally defended the harbor, but the guns see more ceremonial salutes than real warfare. Beacon Hill is a popular destination for runners and picnickers.

Leyjono Island (4) Once part of the harbor fortifications, the island is now a city park reached by regular ferry service. Upon their arrival in Bazinthiad, Helaina’s children visited the golden monkeys housed in the park.

The Liyzapella (6) The park immediately adjacent to the Imperial Pivot. Gabris of Troll-magic first sets eyes on the emmissaries from Elamerony as these flamboyantly garbed folk ascend the last stairway up from the Liyzapella.

The Imperial Pivot (7) The seat of Giralliya’s government. It houses chambers for the empire’s three legislative bodies and office space for the exemplars, the paucitors, and the princes and kings. The imperial ministers have their headquarters, along with work space for their larger staffs, in neighboring buildings.

Lantern Park (9) Bazinthiad’s botanic society tries out their proven new finds from the plant world here in spectacular flower displays. The park acquired its name when it became the first public space lit by gas lanterns instead of oil lamps.

The Old Armory (11) Headquarters for the Sentinel Watch (the military arm of the Ministry of Incantors). In Troll-magic, Gabris and Panos organized the experimental healing of Mabiogia in the gymnasium space (previously a chapel) of the armory. Blood Falchion and Hunting Wild transpire in the fortification 2000 years and 1200 years respectively before the time of Troll-magic.

Newcastel (12) Ancient by the time of the events in Troll-magic, Newcastel (Castel Zaphiron) was commissioned by King Xavo of Hunting Wild.

Custom House (13) Caravans of mussel shells, silk, and dried lavender buds once arrived at the city’s east gate. The pack animals were stabled at Custom House while the trade goods were unloaded. More varied stuffs arrive there now via a spur to the rail line. The terrain did not permit the routing of the line into the city, so wagons transfer the goods from the rail station to Custom House.

Navellysmote (14) Ancient seat to a line of disloyal lords, the Navellysmote became an imperial possession used in defense of the Marcehaven Harbor. It currently serves as a museum featuring artifacts from the era of sea battles between sailing ships.

Quay House (15) A vast indoor market that rents goods stalls to seafaring merchants. A smaller area on a partial second floor houses a captains’ club and posh bed chambers to accommodate both ship’s officers and the merchants themselves.

Institute of Medicinal Flora (16) A college of scholars investigating all facets of the realm of medicinal healing. Helaina purchases a student’s membership upon her arrival in Bazinthiad.

Chamber of Princes and Kings The Empire of Giralliya borrows the hierarchal structures of its conquered territories and gives them a role in the imperial government. Each prince or king (or caliph or mogul or rajah) represents the interests of the principality or kingdom from which he or she hails.

Chamber of Paucitors The office of paucitor was created before that of exemplar to balance the overwhelming influence of the conventionally prestigious and powerful. One paucitor from each canton is selected by lot to serve a term of five years. The Emperador may appoint additional paucitors under specific circumstances. The Legend of the Beggar’s Son tells the tale of the first paucitor.

Audience Chamber A grand throne room used more on ceremonial and festive occasions than for governing. The offices of the Pivot occupy the top floor of the same corner tower.

Verging Antechamber In days gone by, the Verger was always an antiphoner. Any petitioners wishing to approach the emperador held his rod of loyalty and repeated an oath of commitment to the wellbeing of the imperium while the Verger scanned their radices and arcs antiphonically. Now the Ministry of Palladia does background checks of all entrants on the petitioners’ list.

The Gallery Tiers of stepped benches accommodate all sixteen ministers plus their adjutants and the envoys from the three legislative chambers when the full imperial cabinet meets.

Russet Library Stocked with scrolls and books of history and governmental precedent often consulted by the emperador. Also used by gatherings smaller than those of the full cabinet. The meeting where the reader meets Gabris in Troll-magic takes place in the Russet Library.

The Pivot The emperador’s executive privilege operates from these precincts. Here Zaiger signs into law the acts proposed by any of the three legislatures and ratified by the Chamber of Exemplars. From the Pivot’s windows, Gabris watches the approach of the Elameronean delegation.

The Sanctum At intervals throughout his day, Zaiger practices the postural sequences beloved by most of the Giralliyan populace. An advanced practitioner, he engages in meditative focus and breath techniques as well. His staff and advisers know not to disturb him during his brief visits within his Sanctum.

For more about the world of Troll-magic, see:
Who’s Who in Troll-magic
Families in Troll-magic
Bazinthiad’s Fashions
Magic in the North-lands
Magic in Silmaren
Radices and Arcs
Mandine’s Curse
The Suppressed Verses
Character Interview: Lorelin
The Accidental Herbalist
What Happened to Bazel?