“My blood seethed with power.
“The ones who didn’t fear me wanted something from me.
“I was the Serpent. The original tempter. The one who convinced humanity that the fruit from the Tree of Knowledge belonged to them, too. People assumed I was evil because their books told them so. They blamed me for everything wrong in their lives, including their own crappy decisions. They ought to have thanked me instead. Wasn’t for me, they’d still be walking around naked in a paradise that was more like a prison. Wasn’t for me, they wouldn’t have two brain cells to rub together.
“Evil? No. Bringer of knowledge? Yes.”

I first encountered Leslie Claire Walker and her short story “Blood to Blood” in a book bundle containing The Uncollected Anthology: Magical Motorcycles. I knew within the first few pages of the tale that I would want to read more by her.

Walker presents a world in which the serpent of Eden has become Malek, a tattoo artist who speaks only in sign language and who inks magical and deadly tattoos with his own poisonous blood. Old gods with new names stalk the night—The Mayor, Gator, and other monstrous powers—while the Fae cross the deadly In-Between to emerge from Faery and meddle in the affairs of men.

“Phoenix,” another short story by Walker, tells the tale of Stacy, a human witch who steals one of three most precious possessions from a princess of Faery. Something more precious than blood, safety, or home.

I loved both “Blood to Blood” and “Phoenix.” When I encountered “Silver Dust,” which continues where “Phoenix” left off, I loved it as well.

Malek appears in all three stories; he is the protagonist in the first, while the young witch Stacy takes that role in the second, and the Faery princess Silver in the third. Each of them engaged my partiality and pulled at my heartstrings.

I found it fascinating how each installment felt fully complete and satisfying in itself and yet also filled in different segments of a larger saga, approaching the whole from different angles and using different themes.

But, secondly…I have another of my own titles in a book bundle along with Walker’s “Phoenix” and a number of other stories by authors that are well worth reading. Let me tell you a little about the Winter Warmer bundle. 😀

Winter, a time of festivity, of hardship, and cold. Perhaps it remains the most superstitious of seasons and for many the most beloved. Snow, feasting, gifts, religious significance, family and getting together. A time for storytelling!

Thirteen tales about, or set in, the harshest of seasons. From witches to icy realms and faery kings, to holiday nutballs who might be less nutty than they seem. From detectives up against wintery crimes and mysteries to Christmas romance and second chances, there’s something for everyone in this winter warmer.

Available for 3 months only — December, January, and February.

And here’s the official blurb for “Phoenix” by Leslie Claire Walker:

A mystery girl appears in the midst of a winter thunderstorm, seeking a witch to break a terrible curse: the girl has accidentally destroyed the Realm of Faery.

Seventeen-year-old Stacy, young to the Craft but growing in power and reputation thanks to her hand in thwarting the last apocalypse, might be able to save both Faery and the girl.

If Stacy refuses to help, both the realm and the girl will die. But helping the girl can only lead to heartbreak—and a choice that will change them both forever.

An impossible problem. A heroine with the courage and heart to take on the challenge against all odds. To enter the magic, read “Phoenix.” 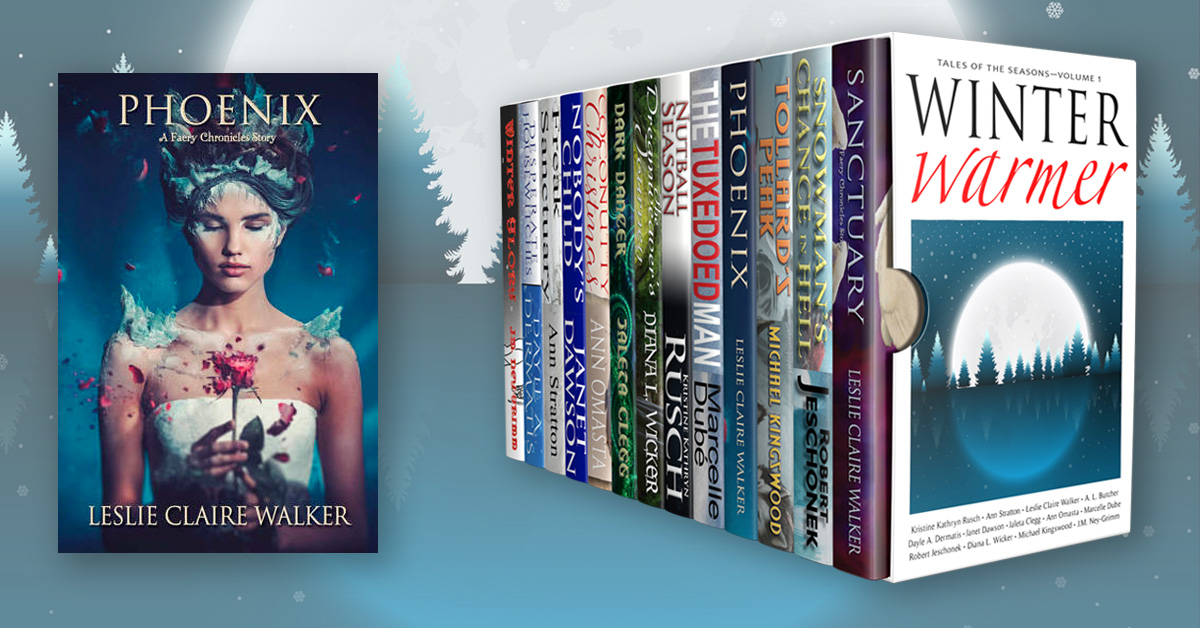